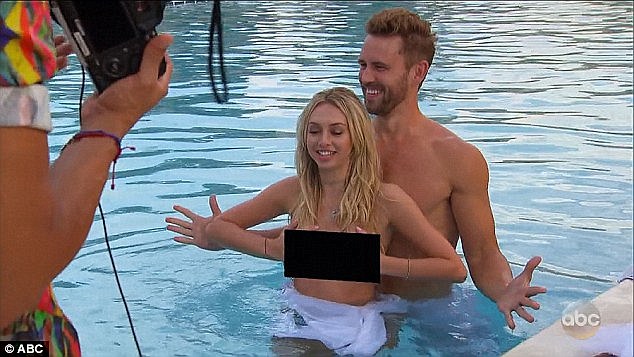 On episode 2 of The Bachelor 24-year-old Corinne Olympios shocked everyone, even Nick Viall when she removed her top and put his hands on her bare breasts during a group date. Yes, somehow – a wedding-style photoshoot – ended up with Nick and Corinne in the pool, and Corinne topless.

Nick said this in his People blog about the awkward situation,

“The biggest surprise of the day came when Corinne decided to take it up a notch — by taking her top off! I was totally shocked. …..

I love how assertive and bold Corinne is, I just never wanted to intentionally make the other women uncomfortable. After such a fun day, I was really looking forward to spending more one-on-one time with the women going into the afterparty. A handful of women continued to be assertive with their time, and none more than Corinne. I appreciated her focusing on our relationship above everything else.”

Really? Was she focusing on your “relationship” Nick? I’m not entirely sure about that. Nick goes on to say,

“Listen, I’ve been through this enough seasons to know that, at the time, she was probably ruffling feathers. I know the value of group date roses — they validate the person you give it to and add pressure to the people you don’t. I didn’t want the target that was probably forming on her back to intimidate her to just be herself, and so that is why I wanted to give Corinne the rose.”

I don’t think Corinne is worried about the target on her back, but I guess now we know why she needs a full-time nanny!

We also know the antics do not end here. Corinne will try and sneak into Nick’s hotel room for ‘off-camera-time” to which Nick replies “I don’t think this is a good idea”.

But word is Nick did sleep with more than just his final 3 girls and I am guessing Corinne is one of the girls he had sex with.

Anyhow, the impulsive decision to throw her top off worked because Corinne gets a rose. ‘My decision to give Corinne the rose wasn’t in any way based off that, for better or worse,’ Nick insisted. ‘It was more based off the conversations that I know a lot of which wasn’t shown.’