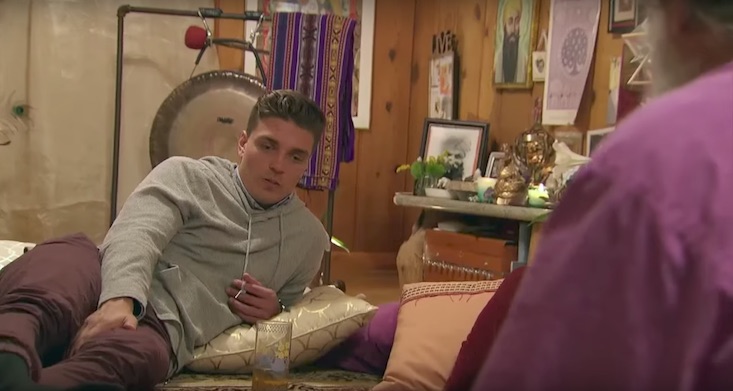 Every season of The Bachelorette one Hometown steals the show and tonight that award goes to 26-year-old Dean Unglert of Aspen, Colorado—hands down!

We knew Dean’s Hometown was going to be a situation because of his strained relationship with his father Chip Unglert, be we did know how big of a situation.

Earlier Dean told Rachel that his dad really was not there for him after his mother Debra passed away from cancer in 2006. Tonight we learned that after her death Chip converted to Kundalini Yogi Sikh and now goes by a the name, Paramroop Singh Khalsa, which means “divinely beautiful.”

We also learned that Chip is a textbook narcissist and a complete a-hole.

In short, his obsession with his New Age belief system led him to neglect the things in life that really matter aka, his children.

But luckily Dean seizes this opportunity to confront his narcissistic father on national TV.

I will say the one thing I did like about his dad was the lack of furniture. But that was about it.

So Dean and Rachel walk into dad’s home where dad and his equally eccentric and  oblivious step-mother Santantar are sitting in a circle on the floor with Dean’s brother Ross and adorable sister Skye who looked uniformly freaked out that this was their reality.

And despite no furniture the room does have a giant gong. Chip requests that they lie down with their heads pointed toward the gong, so that when he plays it, he can clean the energy in the room.

Im not sure there is a large enough gong on this planet to clear the bad air between Dean and his dad.

The New Agers love their rituals so of course Paramroop has prepared a ritual to do in honor of Dean’s dead mother.

Although I think Dean and his siblings would have appreciated a little love and support from their father in lieu of all the feathers, but I digress.

Anyhow Dean’s dad claims that when Dean’s mom Debbie died, she told them that feathers would be her sign. So naturally P is holding two feathers as he gushes about how much he loved Debbie (but not as much as his new wife), and he is crying as he hands Dean and Rachel each a feather.

Dean’s dad then wants to talk to Dean alone, aka with only the camera crew and boom mic operators. Everyone else has to stand outside as Dean and his dad work through 26 years of dysfunction.

Sadly, all of the mediation in the world hasn’t made Paramroop anymore self aware because instead of starting off with an apology, he claims he must be a pretty great dad because look at his son.

The bizarre claim sets Dean off as Dean asks if he feels like he’s still “fulfilling things as a father”?

So we got some really great insight into Dean and the sad family dynamic as Dean tells the story of his mother’s death and says his dad came in to his bedroom on the day she died, put his hand on his shoulder and calmly said ‘your mom passed away 30 minutes ago’ ….with zero emotion.

And after that dad refused to provide any emotional support to Dean or his siblings. His dad decides not to acknowledge any wrong-doing and just gets angry at Dean, lamenting about how hard he worked to put his kids through school. “It was horrible watching your mother die!” Chip exclaims.

He then says he didn’t know how to be a mother and walks out ending the conversation.

Paramroop then even shuts down Rachel outside as she tries to have a civil conversation with him.

Anyhow, the whole episode reminds me of why I hate the New Age movement. Don’t get me wrong. I went through a serious New Age phase from about 2004 to 2010. I went to yoga, meditations and monkey chanting, etc, but needless-to-say after several years I bailed because for all of the ‘positivity and peace, love and light’, the people immersed in the community were all annoying –they were all just like Chip in one way or another –delusional, self-centered and totally oblivious to all the people they had hurt.

The episode left me feeling really sad for Dean and his sweet sister Skye and brother Ross. They deserve much better than Para-poop.