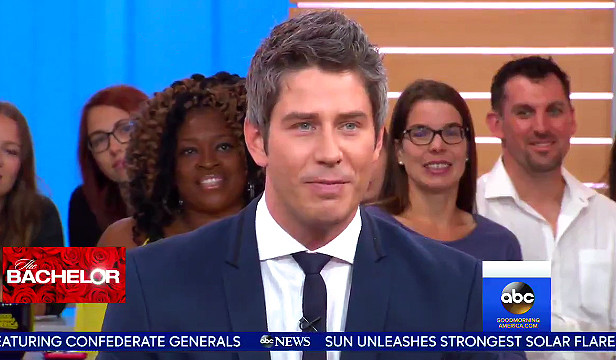 Holy crap! Bachelor producers really pulled a fast one on Bachelor Nation fans today by announcing that the lead for the 2018 season of The Bachelor will not be Bachelorette runner up Peter Kraus, nor will it be second runner up Eric Bigger, nor bartender Wells Adams, nor Dean Unglert, nor Robby Hayes, nor Luke Pell, nor Alex Bardyukov. In fact the lead is not any name that had been floating around as lead potential.

Producers pulled 2012 fan favorite Arie Luyendyk Jr. out of their production hats to lead the 2018 season!

I’m stunned for a couple of reasons: 1, Bachelor Spoiler and NSA wire-tapper Reality Steve was certain that the lead would be Peter Kraus (which is one reason I am not sure this is not a stunt on the part of producers to get Peter to stop being such a diva). And 2, Arie was very popular in 2012, but does he really have that same star power 6 years later? And 3, it’s really early for them to make this public announcement. They usually wait given their propensity to change their minds.

This is certainly a gamble on their part and also an indication of their desperation. It’s hard to believe that no one from The Bachelorette or Bachelor in Paradise could make the cut to lead the show, but apparently they did not.

So producers went in to their archives circa Brad Womack 2011 and chose 35-year-old professional race car driver and now real estate agent Arie Luyendyk Jr. from Emily Maynard’s season 8 of The Bachelorette.

It’s actually not the first time producers have seriously considered casting Arie. He was in the running in 2015 as well against Chris Soules.

“This is pretty surreal,” Luyendyk Jr. told PEOPLE. “It doesn’t really feel real yet, but I’m taking it step by step. The timing is just so perfect in my life. I could not be more excited for this journey I’m about to embark on.”

“I’m not nervous,” he concedes. “Now that I’ve had some time and distance away from it, it feels like the feeling I had before I went into it the first time. I think sometimes when you’re on The Bachelorette and you jump right into being the Bachelor, for me it would’ve been too soon. This feels more natural. I’m not concerned what people think. I’m just focused on the outcome. I want to find my person and will do whatever it takes!”

So here’s the situation:

I’m not entirely surprised that ABC made this major change in their standard operating procedure since they really need a Bachelor that can make it to the altar and since Arie is older than the other names that have been circulated they likely think the seasoned race car driver is ready to settle down.

That said, there are also some seriously scandalous rumors circulating that Arie and his wingman and Bachelorette co-star Jef Holm like their ladies young and have no problem getting them—which leads me to my next theory—that Arie is being thrown out as a red herring by producers in an effort to get the guy they really want–Peter. It’s hard to imagine that producers aren’t well aware of Arie’s reputation and would be willing to take this risk.