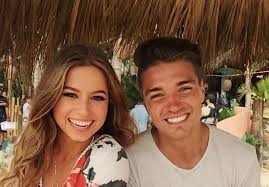 Dean Unglert‘s behavior on Bachelor in Paradise was confusing to say the least. He began the season as a fan favorite and ended in Bachelor infamy after swiftly shifting his romantic feelings from sweet Kristina Schulman to sexy seductress Danielle Lombard.

Dean’s boneheaded maneuver disappointed his fan base (and ended his chances to be The Bachelor) and devastated 24-year-old Kristina.

But he did demonstrate tearful contrition on the finale lamenting in his ITM’s about how Kristina should have been his first choice all along. Yet somehow despite those very strong feelings, he continued to date 27-year-old Danielle Lombard in real life after the show finished taping.

Dean’s incessant flip-flopping was agonizing for fans and host Chris Harrison who was getting blindsided left and right on the reunion last night.

But don’t give up hope just yet for Dean and Kristina. On Monday, the love trio appeared on The Ellen DeGeneres Show to discuss the situation.

“The first day in Paradise, [we both arrived] early on,” Kristina explained. “So we started talking, and just hit it off. I had a date card and I took him, so it just felt immediate.” But then D Lo lands and sets her sights on Deanie baby.

Luckily for Dean, time, (1 month), heals all wounds and Kristina no longer had hard feelings for him and even hinted that reconciliation is possible.

“I think the first day I just saw how kind he was,” she said. “Raven and Alexis came out of the ocean and they were shivering and he just goes and grabs a towel and puts it over them. I was like, ‘You know what? That’s so sweet.’ I just kind of wasn’t used to seeing that from the guys I’ve dated. It was just kind.”

And then Ellen asks the most important question of all….

“Would you ever consider trying to rekindle this?”

“Only if this guy learns from his mistakes,” Kristina says as she turns to Dean and smiles.

“I think that I personally have a lot of growth to do,”… “But she’s amazing and I mean, I hope that we continue to talk and see where that might lead.”

I think that’s a “yes”!!!! We will definitely be keeping tabs on this situation!