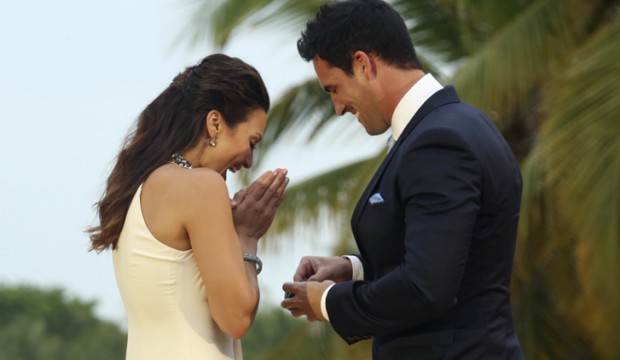 Andi Dorfman has a brand new book coming out in a few days, A Single State Of Mind, and she is throwing some serious shade at the show that made her a household D-List name.

My first question is: does anyone sign an NDA on this show? Courtney Robertson, Emily Maynard and Andi Dorfman all giving up behind the scenes details that don’t really reflect that well on show production.

The 30-year-old former Atlanta attorney turned author revealed that she was blindsided when her ex-fiance, Josh Murray, got engaged to Amanda Stanton on Bachelor In Paradise and when no one in production clued her in. Andi had enjoyed a pretty cozy relationship with producers of the show, so their failure to give her a heads up left Andi feeling a bit deserted.

Dorfman claims in her book that producers pretend to be friends with contestants while they are on the show; but quickly disappear once their 15 minutes is over.

“What does bother me a little bit, however, is that I’m so out of the loop….You’d think that having been a lead and having developed close relationships with the producers, there would be some show of courtesy when your ex-fiance goes on a spin-off of your own show. But no. Not a word. I guess I shouldn’t be surprised. The truth is, when it comes to everyone associated with the show, every contestant is disposable. The day your season is over, the producers are on to the next.”

Oh dear. I have to side with producers here. Why would they take the chance that Andi could confide in friends who could then confide in tabloids about the shocking finale? I liked Andi at first, but Judgy Judgerton is turning into a big buzz kill and a bit of a diva. She goes on to lament,

“I noticed this shortly after my season ended,” …… “Some of the producers had gone from texting me daily or weekly, to monthly, to eventually never at all. I watched as they slowly trickled out of my life.”

I think someone’s turtleneck and pearl necklace are on a bit too tight and are cutting off the circulation to her brain because her expectations seem downright delusional.

“Did I think producers were my friends at one point? Sure. But at the end of the day, they all had jobs to do and livings to earn. I was a project, and, like any worker, once you complete a project, you move on to the next. I’d be lying if I said it didn’t sadden me a little to feel like I was nothing more than work to them.”

Ding, ding, ding! This is THEIR job. I’m just shocked that Andi expected any more. The fact that they continued any relationship with her after the show ended is way more than any contestant should expect.

Then Andi dares to question the motives of contestants who go on the show now.

“The other thing about the show and these viewing parties is that a bunch of other former contestants always go to them [viewing parties],” …… “They all cling to one another and upload tons of photos and snaps whenever they hang out together. I understand there is an underlying bond among contestants of the show; trust me, I’ve experienced it myself. We all share the experience of being plucked from our normal nine-to-five jobs and inserted into a life that is anything but normal. But other than that, what do we all really have in common? Am I really inherently bonded with a contestant just because she went on the same show I went on four seasons later? What would I even talk to her about? The show? That’s exactly what I don’t want to talk about.”

These might be valid observations if Dorfman was not behaving the exact same way!

She then lashes out at JoJo Fletcher, Lauren Bushnell, Amanda Stanton, and Becca Tilley–gently referring to them by their ‘corn-field photo shoot’.

After the below comment she said “I”m not hating on them. But I’ll leave the posing-in-cornfield photo shoots to them.”

“The other thing is, I’ve seen how social media has changed with every season of the show since mine,” Dorfman starts out. “When we went on, there was no social media, really. It was kind of shocking when we all got off with fifty thousand or a hundred thousand followers. Now it’s shocking if these contestants don’t come off with half a million followers. It’s become such a thing that I wonder if most of the contestants are now going on the show simply for a social media following. Which leads me to distrust the ones I don’t know.”

It’s not like Andi tried to bank off of her stint searching for love on the show with two tell-all books!!

“When I see these people building their lives around social media and a television show, it seems only natural that in order to fuel that engine, you have to keep gassing it up. And how do you gas it up? With photos and friends who are also building their lives around the same show. Do you really think half these people would be friends if social media didn’t exist?”

Of course not Andi!! Its a R-I-D-I-C-U-L-O-U-S show!!! A ridiculous show that has made you very wealthy and famous. Maybe producers aren’t contacting you because you’ve become boring, vapid, pedantic and most importantly been bashing them and writing tell-all books!

7 Things to Know about Chelsea Roy