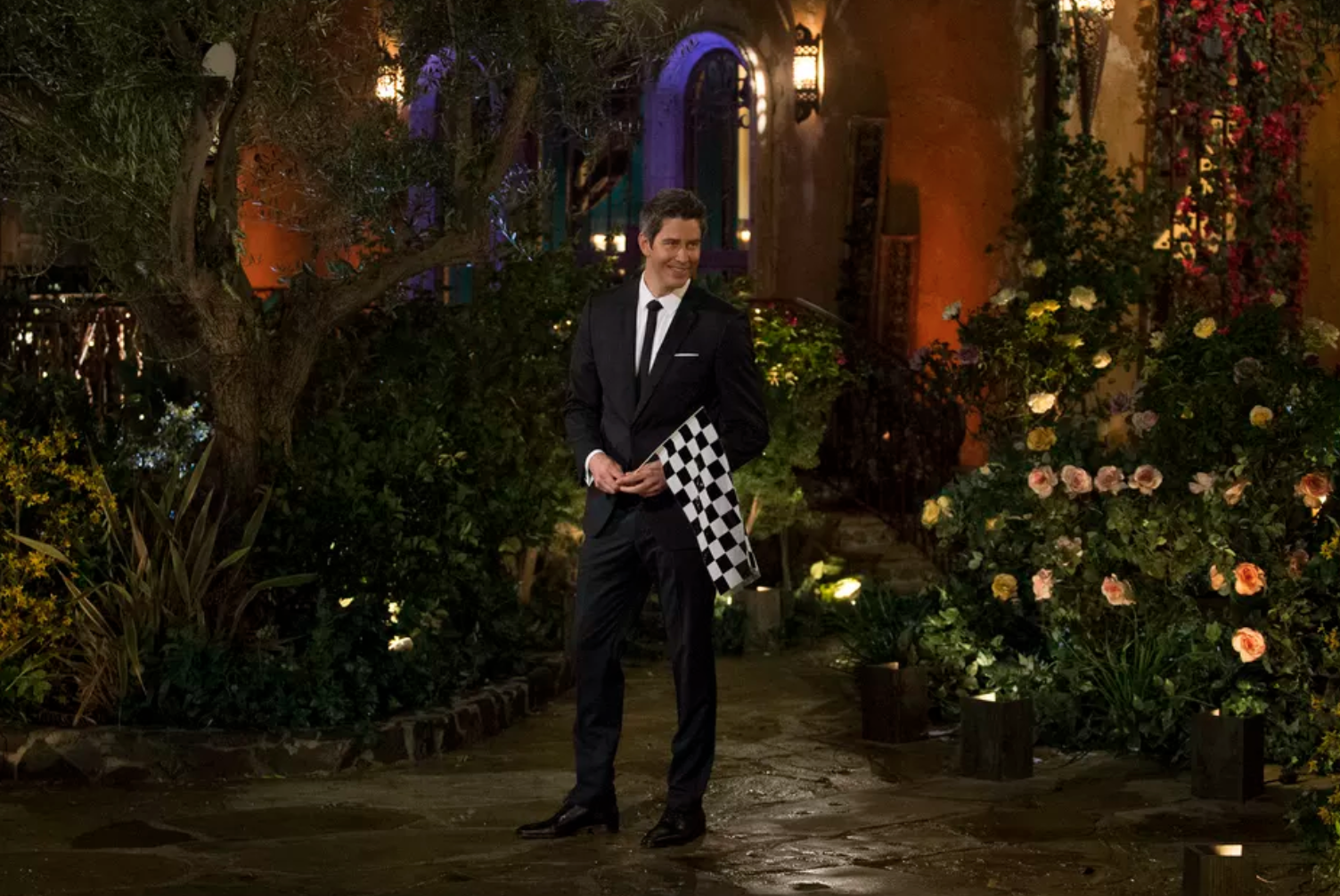 ‘The hair is down and the boobs are out’

First we are reintroduced to Arie, because frankly, most of these girls were in junior high back when he was a Greaser on Emily Maynard’s season of The Bachelorette and most of America has forgotten who he is.

So ABC has to remind us that Arie IS a sympathetic character (despite what you have heard about him in the tabloids) and did have his heart broken by Emily. I have to say the recap of Emily’s season made me remember what an amazing season that was…but I digress.

ABC also let’s us know that Arie does have a day job aka not race car driver–he is a realtor in Scottsdale, Arizona, but I think that’s a slight exaggeration and his real job title is ‘unemployed’.

Then my all time fave Bachelor couple arrives to dish some advice–Sean and Catherine Lowe with cute baby Samuel. I think Sean gets the award for most husband material the show has ever produced. And they bank on that by bringing Sean back to advise new Bachelor’s and to remind America that this kooky process works. BTW I do have Sean’s book For the Right Reasons.

Chelsea, 29, is a single mom from Portland, Maine, and make no mistake, she is here ON A MISSION. She is mother to 3-year-old Sammy. She does take the opportunity to take a dig at her ex husband by saying she wants Sammy to have a good male role-model. OUCH!

She also commented about how happy she was that Arie was pursuing a single mom on his season of The Bachelorette.

I thought Kendall, 26, was a shoe win when I saw her bio online, but the taxidermy thing really worries me. When she broke out the ukulele in front of a stuffed seal and free-styled a song rhyming taxidermy with romantic journey I got a teeny bit spooked.

Caroline, 29, is just a little too pumped and enthusiastic about her career being a realtor. I’m not sure if she is looking for Arie to be her husband or her biz partner.

Marikh, 27, is shown in her and her mom’s Indian restaurant, talking about how she is going to bring her Indian spice to the competition.

We met 23-year-old nanny, Bekah from Fresno, California and I’ve gotta say I think Bekah Martinez might be the cutest most charismatic girl I’ve ever seen on this show. I really think if things don’t work out with Arie, Bekah should open her own charm school. Krystal, 29, is a health & fitness coach from right here in San Diego, CA that has a homeless brother. Bro has rejected the help of his family, thus has chosen to be homeless. I’m so over the homeless guilting given I know how much politicians in San Diego make off of solving “homelessness”.

Anyhow, I have a strong feeling he is the living out of his car in O.B. kind of homeless. I’ll keep an eye out for him and buy him a burrito and tell him to suck it up and call his fam if I see him.

Ok, meanwhile back at the Bachelor mans Chris B Harrison assumes his usual professional posture on the freshly hosed driveway. He greets Arie and gently grills him about why he is still single 5 years later. Arie delivers a very generic answer, but as a longtime Arie fan and online Arie stalker, I’m afraid I know the answer–Arie can’t stop cheating!

Some of the 29 Amazing Ladies to Arrive…

First up realtor Caroline Lunny who tells Arie that she is also a realtor and hopes at the end of this that both of them can be officially, “off the market”. Heyoooo!

Seinne Fleming, 27, tells Arie how important loyalty is to her (which makes me wonder if she has ever Googled Arie) and that elephants are her favorite animal and she gives him elephant cuff links.

Tia Booth, 26, hails from Weiner, AR so you know producers want to make the most of weiner jokes. She steps out armed with a tiny Oscar Mayer weiner whistle saying, “Please tell me you already don’t have a little weiner.”

Poor Tia! She is super cute and charming and a really good sport. You know producers forced her to do the ‘little weiner’ schtick and she was d-y-i-n-g inside.

Becca Kufrin, 27, arrives and makes Arie get down on one knee and proclaim, “Rebecca Jill, are you ready to do the damn thing.”

Brittany Taylor, 30, reminded us that Arie is actually not American. He’s Dutch. Arie was born in Den Bosch, Netherlands, but the Luyendyk family moved to Brookfield, Wisconsin when Arie was 2-years-old.

She tells him, “You’re handsome” in Dutch. Although, I’m not sure if Arie even speaks Dutch.

Amber Wilkerson, 29, explains that she’s a spray tan artist and informs Arie that she’s seen a lot of d**ks in her life and hopes he’s not one of them. Again, have any of these women Googled Arie?

Ali gets an A+ for creativity but maybe a C- for effectiveness. She makes Arie smell her armpit saying, “Is that not the best pit stop of your life?”

It was definitely a risky move on her part. You never know if the ‘ol smell my armpit intro is going to be a hit or a miss. Former OHiTS writer Penny Farthing got that amazing offer from a first date and it did not impress.

Annaliese Puccini, 32, plays on the ‘kissing bandit’ epithet assigned to Arie by wearing a mask.

23-year-old photographer Maquel Cooper rolls up in an Indy car. Incidentally the ink is barely dry on her recent divorce from Josh Munday who is still pining for her and hoping for a reconciliation.

Chelsea kind of dominates the cocktail party and Arie’s time. The girl is not messing around and she is not here to make friends. She lets Arie know that she has made some serious ‘sacrifices’ to be there, but decides not to disclose what those ‘sacrifices’ were just yet. Brittany scores the first kiss with a very strategic maneuver–she sets up mini race cars and cones on the freshly hosed driveway and challenges Arie to a race.

“If I win, I get a kiss,” she proclaimed. Naturally Arie let her win.

The kiss doesn’t go over well with Chelsea who asserts.

Obviously Chelsea’s aggressive approach is working and giving her an early lead because Arie gives her the first impression rose.

Time definitely seems to be a major sitch for the ladies so I loved that when Arie told Krystal they didn’t have ‘much time’ and he wanted to get to know her, she hollered, “I’m a libra!”

And the Roses Go to….