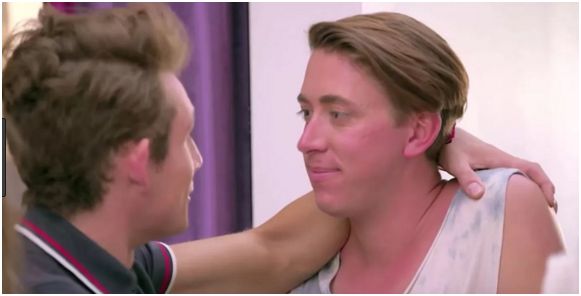 Since season 6 of Vanderpump Rules began star James Kennedy has been conspicuously flirting with former foe Jax Taylor. But it was Monday night that really answered the big question: is James Kennedy gay—or at least bi-curious?

Yes, with a little help from men like Jose Cuervo and Jack Daniels and James best friend of 3 years that we oddly have never met until now, Logan Noh, James came out of the closet–sort of. His behavior with his BFF was so flirtatious and over-the-top, his girlfriend Raquel Leviss was visibly uncomfortable — as were his co-stars.

It all started when James flipped out that Lala Kent and Logan disrespected his alleged girlfriend by doing something unspeakable to her pasta.

James gets animated and aggressive shouting, “It’s not about the pasta.” …”It’s about the fact that you guys are not respecting my fake beard of a girlfriend at gay pride and are making me look gay”—Ok he didn’t exactly say the last part, but I think it was implied.

Basically everyone is having a hard time playing along with the script of Kennedy’s pageant queen girlfriend and he is getting pissed off. Now Logan is getting very amorous with James and keeps kissing his neck and suggesting that they are in love. James keeps using the word ‘friend’, but there are clearly ‘benefits’ in this friendship–we just aren’t sure what those ‘benefits’ are yet.

James says, “Raquel and Logan fill totally different voids in my life.” I’m sure they do.

Sure lots of people think James is pretending to be gay to stay relevant and on the full-time payroll of VP Rules and I might agree except that I discovered some very compelling evidence that Kennedy was gay last year before any of this emerged. So I do think JK is gay. He likes Logan, but James is a size queen for sure, so he LOVES bi-curious co-star Jax.

Jax is the target and end game for James….and every gay and trans man (did you notice the flirtation between Mr. Jax and Billie Lee?)

So get ready. James’ life is spiraling out of control. He may try and walk back the gay thing for a few episodes, but soon it will be clear and out in the open–I guarantee it.

‘Logan told me last night that he is sleeping with James,’ she recalled.

And given how uncomfortable their flirtation on screen was I was relieved to see it wasn’t just me seeing the chemistry. EVEN clueless Jax Taylor caught wind of it claiming James’ girlfriend Raquel Leviss ‘dumb as rocks’ for not realizing it.

‘Of course James and Logan are sleeping together, have you not seen them together? You can totally tell they’re boning,’ Jax added.

‘I’m not going to sit here and talk about how much I love p****. James professed.…’Everyone knows that…I’m James Kennedy.’

Kristen Doute also had her “doubts” that her ex was totally straight as did Tom Schwartz who speculated that there was a ’77 percent chance’ that Logan and James were having oral sex–I’d say a 100% chance.

In a phone call to Logan, made by James in front of the Cartwright family, Logan tells James it was all a lie, but what do you want to bet James and Logan arranged to have that convo beforehand, conveniently in front of cameras?