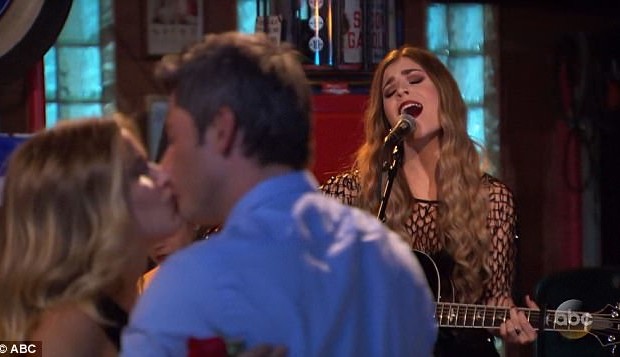 Bachelor Arie Luyendyk Jr. wastes no time getting down to business on his 1-on-1 with single mom Chelsea Roy.

The gorgeous 29-year-old former Miss Maine has definitely peeked Arie’s interest. First of all, Chelsea is so Jennifer Jason Leigh in Fast Times at Ridgemont High–with her quiet, mysterious, confidant, sphinxlike sex appeal–so no wonder Arie is so hooked.

Arie drops by the W hotel to ask Chelsea on a yacht date, prompting Chelsea to exclaim, “I’m on a dreamboat but I’m also with a dreamboat.” I’m not sure that Arie qualifies as a ‘dreamboat’. The last ‘dreamboat’ in Bachelor nation was Jef Holm. Arie is more of a ‘looker’, and ‘eyeful’ a piece of arm candy, etc.

On the date Arie decided to ask Chelsea about the baby daddy sitch.

“Going into that night, there was still so much I needed to know about Chelsea. To give Chelsea a rose, I always needed to be 100 percent sure that I felt we could have a future together. Every woman made a sacrifice to come meet me, but, with Chelsea, each week with me was a week away from Sammy.”

Ok, so Chelsea’s baby daddy’s name is Mike Wilson and he was significantly older than Chelsea. The two never actually married, but had known each other for 3-4 years before she got pregnant.

And sometime during the first year of their son’s birth, Mike started cheating with a woman that he is now married to, incidentally to pageant winner, Rani Williamson.

The couple now has their own 5 month old baby boy.

And unless Arie plans on moving to Maine, I suspect her days on the show are numbered. Arie continues in his blog,

“During dinner, Chelsea opened up so much about her relationship with her ex and how that shaped her life. It broke my heart to hear her story of heartache and loss, but it made my appreciation for the strong, beautiful woman who sat before me grow even more. …. Ending the night dancing to Tenille Arts was the perfect end to an incredible date. Just like the day, our final moment was all about us and our relationship, not about all the fancy stuff surrounding it.”

Incidentally, Sammy won’t be appearing on the show because daddy would not sign off on it.

Arie Luyendyk Jr.'s shares details on his 2-year relationship that ended in a miscarriage