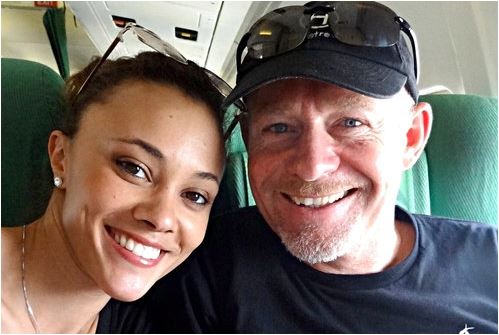 I have to say 57-year-old Michael Darby set off my gaydar the minute I saw him —even prior to the rumors, so it’s not shocking to learn that the rumors have been confirmed.

Last night on the premiere of season 3 of Real Housewives of the Potomac, Karen Huger, 54, deflects from her own familial scandal after Gizelle makes accusations to Karen about her husband Raymond Huger and their money and the alleged 5 million dollars he owes in back taxes. Karen says that she’s got her own money. Gizelle says, “Karen don’t work!”

And Karen takes the opportunity to tell everyone that Ashley Darby’s husband is gay and on Grindr and his dick is all over Instagram. Wow!!!! Unfortunately I can’t show you the ‘full’ picture, but suffice it to say, it’s true.

“Did Michael get indicted for his ding-a-ling swinging across Instagram?” Karen asks.

Yes it came out in 2016 that Michael was having an affair with a black man, a man he reportedly met on a business trip in London. The man spent 2 days at the hotel with him. The young man claims that Michael bought him Chanel aftershave and a Cartier love charm. And he only discovered that Michael was married to a woman when he saw him on Real Housewives Of Potomac!

And thankfully the young man saved the receipts. So look for more to “come out” on this salacious situation!