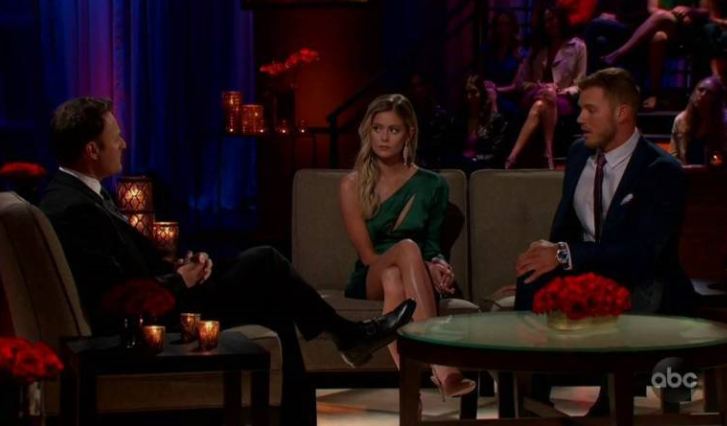 Tonight in a rather bizarre twist Bachelor Colton Underwood broke up with his final two amazing ladies, Tayshia Adams and Hannah Godwin and vowed to continue pursuing the third amazing lady who unexpectedly walked off.

But what may be more shocking was that 23-year-old Hannah Godwin was shocked by the break up even though Colton decided to forgo his Fantasy Suite and stay as an individual in his hotel room.

You would think that Hannah would catch on and realize a breakup was imminent, but alas this is The Bachelor where nothing is surprising.

Hannah was anxiously awaiting her date with Colton in Portugal, when instead, Colton showed up to Hannah’s hotel room and told her that he was in love with Cassie Randolph.

Luckily, Hannah appeared on The Bachelor’s live show on Monday to discuss the situation, saying this about the moment he showed up at her hotel room. “I’ve been dreading that moment for months,” she laments as she watches the breakup, adding that she was “blindsided” by the news.

Armchair psychologist Chris Harrison counseled Hannah reminding her about the fact that Colton gave her the first-impression rose and told her repeatedly that she reminded him of “home.”

To which Hannah replied the words “became meaningless”. (“Became”?)

As to how Hannah is coping now a few months later…..she says that she’s returned to her regular life but that it’s been difficult “reliving” her relationship every Monday night when The Bachelor airs each week. “My heart was just so in it, and it’s not just a show,” she tells Chris.

“I’ve been hoping for more closure as I watch every week,” but said she still feels “more confused” than she did the night of their breakup in Portugal.