Bachelorette Hannah Brown lashes out at fellow Christians shaming her 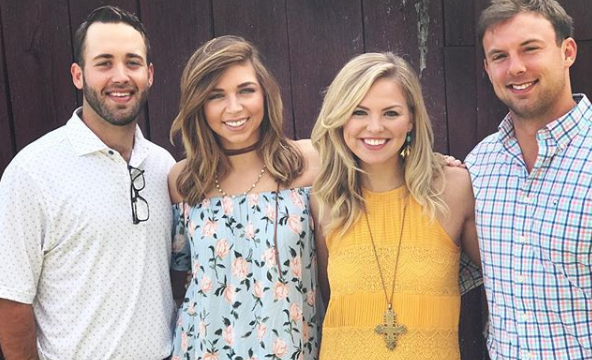 Bachelorette Hannah Brown lashes out at fellow Christians shaming her

Last Monday night on episode 8 of the Bachelorette, Hannah Brown got really cheeky and daring …. and in an effort to ‘dive in’ to the Netherlands culture (aka the culture of no boundaries), she went on a one-on-one date naked bungee jumping with Garrett Powell. Later after Brown regaled some of the other men with the tale of her daredevil date, fellow Christian suitor, Luke Parker, lost his cool and confronted Hannah with his disapproval.

“I know that your body is a temple and honestly like I’m just thinking of you holding him bare skinned,” Parker told the Bachelorette… adding… “It really pissed me off” …. “I felt like it was a slap in the face. But no matter what you do, I’m going to support you. Even if you make a boneheaded mistake… At the end of the day, we’re gonna get through anything.” 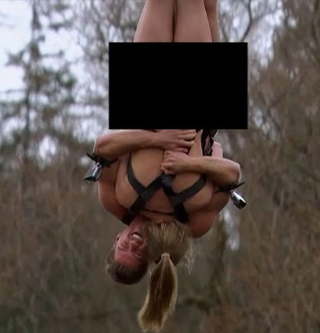 Brown then confronted Luke saying, “But even if it was at this point it doesn’t matter because you’re not my husband. You don’t own my body. You don’t own me. It’s my body.”

‘I am never going to control you,’ Luke promised. ‘I will never tell you what you can and can’t do with your body.’

Later in the episode Luke and Hannah sit down so Luke can once again profess his love for the Bachelorette aka beg her not to boot him. He regales her with a story of being in the shower and feeling the heavy hand of the Lord pressing down upon him and forcing him to reflect on his worldly exploits.

The two both discuss their relationship with the Lord and bond on the temptation of worldly desires and decide to keep pursuing this horribly dysfunctional relationship, because it is after all….what Jesus would do.

But Luke isn’t the only one lashing out at Hannah for her permissive dating style. She posted on Instagram a very long caption revealing that she is getting a lot of backlash from Christian fans. 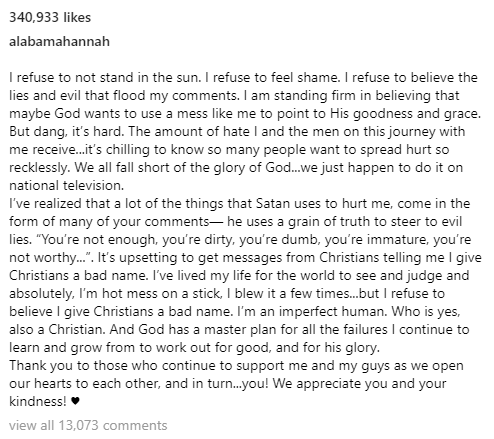 “I’ve realized that a lot of the things that Satan uses to hurt me, come in the form of many of your comments— he uses a grain of truth to steer to evil lies. ‘You’re not enough, you’re dirty, you’re dumb, you’re immature, you’re not worthy…’. It’s upsetting to get messages from Christians telling me I give Christians a bad name. I’ve lived my life for the world to see and judge and absolutely, I’m hot mess on a stick, I blew it a few times…but I refuse to believe I give Christians a bad name. I’m an imperfect human. Who is yes, also a Christian.”

Satan definitely works on this show.