Hannah B and Jed Wyatt get engaged….and then break up 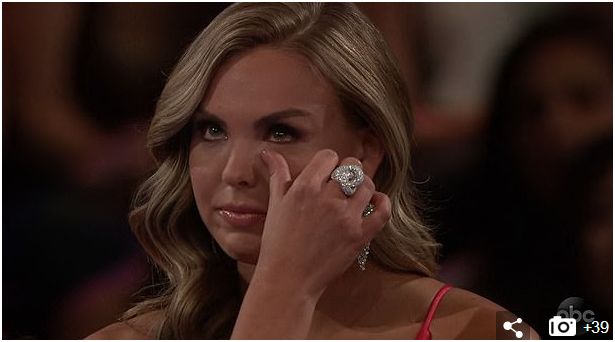 Hannah B and Jed Wyatt get engaged….and then break up

It’s no secret that Bachelorette contestant Jed Wyatt has been in the doghouse since his ex girlfriend Haley Stevens came forward to say that the two were very seriously dating and had not broken up when Jed left to do the show. And on Tuesday’s Bachelorette finale the country crooner proposed to 24-year-old Hannah Brown, but now things have taken a bizarre turn.

Tonight the show starts off with the two finalists in the Mediterranean islands. Jed says in his ITM,

“I’m about to ask Hannah to marry me. It just all kind of hit me, how amazing this could be,” …..“I feel excited and scared. Nervous. This is the biggest day of my life.”

Jed decides to articulate his feelings in a song. After all, “talking is hard sometimes for me,” (and I have an album to promote).

“After all that you’ve been through / And those times you wish you knew / Who was on the other side of all those restless nights / We always knew it’s me and you,” he sings. “Time stands still for us / It’s happened more than once / And every time we’re holding hands and dancing in the sun / Baby, time stands still for us.”

Despite her feelings for Tyler and her uneasiness with the accelerated process she tells the singer-songwriter that while she didn’t “have a song,” she did want him to be her “future husband.”

But that is not the end of this story….

Cut to After the Final Rose aka after the news broke about Jed’s girlfriend Haley. And apparently Hannah decided to believe Haley and broke off her engagement to Jed after hearing Haley’s account.

But no that sad because as the show ends Hannah asks her runner up Tyler Cameron on a date and he says YES!!!