We are only on week two of Peter Weber’s season of The Bachelor and we already have had 2 major situations. The first was the return of former Bachelorette Hannah Brown and the second was the champagne situation vis a vis Kelsey Weier and Hannah Ann.

Both situations epic and unprecedented.

The episode begins with a very emotional heart to heart between Peter and Hannah backstage at the Avalon in Hollywood.

And just when you think this season is going to be all about Hannah and Peter a new situations emerges. 25-year-old “professional clothier” Kelsey Weier of West Des Moines, Iowa reveals that she has a very special surprise for Peter. 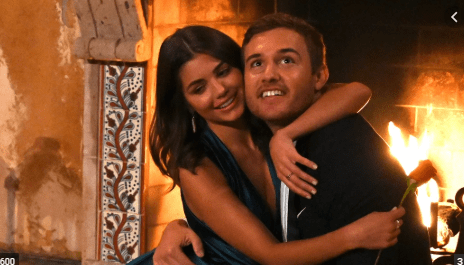 Kelsey intends to open a bottle of champagne she’s been saving for a “special moment.” But she made the big mistake of leaving that special bottle unattended by the outdoor fireplace. Before Kelsey even has the chance to grab Peter… Mykenna gets to him first.

Mykenna is the first to receive the wrath of Kelsey telling her:

In the meantime, Peter is out by the outdoor fireplace cozying up to Hannah Ann, and the two eye the champagne, then pop the cork.

Kelsey is lingering in the background and horrified at the event which she feels certain has absolutely destroyed her chances with Peter.

Kelsey breaks down sobbing as she approaches the couple, then runs to the bathroom to cry. Then returns to rip in to Hannah Ann.

“It’s not okay what you did!” Kelsey screams. “I brought this bottle all the way from Des Moines. Don’t try to play dumb!”

Hannah Ann says she was clueless that the champagne was hers and that this was a mere misunderstanding.

“Apparently there was a mix-up of the champagnes,” Hannah Ann says.

Now that she’s finally sitting with Peter, though, Kelsey is able to calm down and share a romantic toast with the Bachelor.

Kelsey really can’t let it go and lashes out at Hannah Ann once again saying, “You are fake, and I know what you did. It’s f—ed up!” …. “I’m real and you’re calculated — and I’m over it.”

Hannah Ann replies, “I’ve acknowledged your feelings, I respect your opinion, and we’re moving forward,” ….“I’m not,” Kelsey responds. “Just because I’m not a fake bitch.”

Thankfully both women make it through the rose ceremony and advance to the second round.