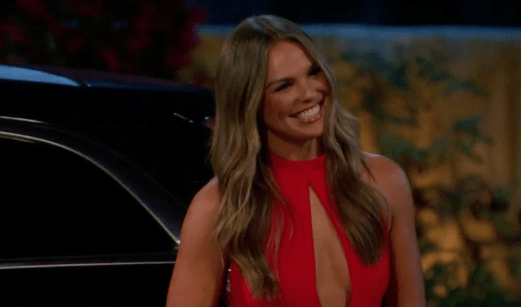 Back up a minute. Monday night on the 3 hour Bachelor premiere, after being introduced to a bevy of stunning ladies, another shoe drops (out of the limo) and its none other than his ex girlfriend, Hannah Brown.

And Hannah is SINGLE because her chosen life partner, Tyler Cameron (well chosen on ATFR after her number one choice Luke Pell turned out to be a total d-bag), ran off with a world class super model that slid in to his DMs shortly after the finale aired, prompting the new amazing ladies to spin in to a full meltdown.

One girl even screams, “is this legal?!” Ha ha, I love that people are so serious about the rules on this show. Of course it’s not legal.

At first the idea of Hannah joining the cast seems impossible since it would seriously hamper Peter’s ability to get to know the 25 other amazing ladies and that would be horrible television.

Hannah wishes her ex beau the best and return his things aka his pilot wings.

But interestingly, Peter seems quite shakin’ up by the interaction, even a little tearful.

He tells his new ladies that they have nothing to worry about and he is ready to get down with his one-on-one chats.

BUT WAIT! Just when you thought the Hannah Beast was out of the picture, she returns for the LAST group date. The date begins with Hannah regaling the girls about the infamous night in the Windmill–the night of not 1, not 2, not 3, but FOUR times.

While the girls are working on their homework of coming up with their salacious sex stories, a producer asks Hannah how she feels about Peter. She tearfully responds that “she does not know”.

Peter finds Hannah in a room crying and asks her how she is doing. He says “this is so weird”.

Hannah says, “I’m really happy for you but it’s just a lot”.

Peter confesses that when he first saw Hannah arrive part of him wished she was coming for more than a friendly chat.

She said she was “confused” when she chose Tyler and says “I don’t know what I was doing”…She begins sobbing in Peter’s arms declaring, “I’m feeling fucked up.”

“what would you say if I asked you to come be part of the house?”

“Do you regret sending me home in Crete?” Peter asks.

“Yeah Peter I question it all the time.”

And scene, cut to previews where the new ladies are confronted with Hannah joining the cast.