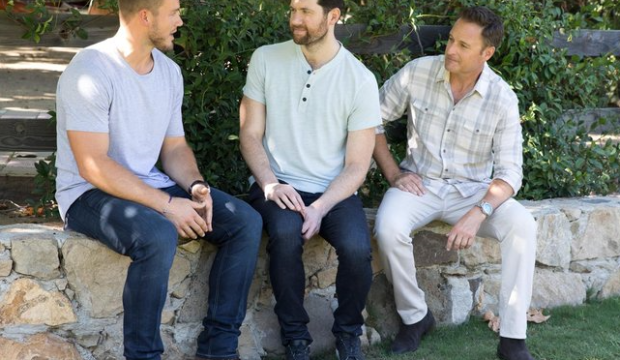 Colton Underwood’s sexuality and his virginity definitely become the big theme of the 2019 season of The Bachelor. People can’t quite wrap their head around how this hot 27-year-old pro football player could be a virgin—especially given that his virginity is not even rooted in any deep religious beliefs.

Bottom line is Colton is too hot, too charming and too old to be a virgin begging some other questions.

Clearly producers know these questions are on every viewers’ mind so they attempt to address the giant rainbow flag in the room with some comedy.

First date goes to Demi, Bri, Tracy, Elyse, Hannah G., Nicole, Onyeka, and Catherine at the Regent Theater in Hollywood. Enter couple, Megan Mullally and Nick Offerman for the “First Comes Love” show. The theme is clearly sexual in nature and clearly intended to alleviate concerns in the minds of the ladies that SOMETHING IS WRONG WITH HIM!

Colton gets on stage and explains how he dropped the bombshell too his uber-manly teammates about his virginity and how his teammate simply replied, “That’s so cool.” But the ladies are so oblivious to the obvious possibility that Colton is gay that the story appears to fall on deaf ears. They are much more preoccupied with telling their deepest darkest sexual secrets in an effort to impress Colton…and America.

Cut to the next Bachelor group date…….and another opportunity for Colton to try and normalize his virginity and convince us he’s straight.

Enter another comedian—that’s right clearly producers know they have to address this anomalous situation very delicately, thus the team of comedians to break the ice.

Billy Eichner sits down with Colton to grill him about his virginity and encourage him to come out of the closet. But Colton laughs off the insinuation and heads to the games: some footraces, and a canoe race between the red team and the yellow team. Billy takes the opportunity to make some virgin/gay jokes.

“I’m glad you waited to have sex until you’ve found someone who can successfully do a three-legged race,” Billy jokes.

Finally, a symbolic and ironic tug of war ensues.

Colton stands in middle of the two teams as as he is pulled in opposite directions, but really producers should have had a 3rd team of gay men pulling Colton away from the ladies.

The red team consisting of Heather, Alex, Katie, Tayshia, Caelynn and Cassie wins an outdoor cocktail hour with Colton and an overnight with the hunky football player.

So of course the overshares thus begin.

Heather  tells Colton about her virginity: “I’m a virgin, but also have never kissed anyone before”, she confesses.

“I respect the heck out of that,” Colton responds.

Caelynn confides in Colton about her childhood encephalitis aka brain swelling in an effort to acquire the sympathy rose. But it’s not enough— the rose goes to virgin Heather aka Colton knows if Heather goes to fantasy suites he wont have to perform.

As a side note my good friend Leslie started texting me about this season. We were discussing Colton’s sexuality.

“I’m on board for the virgin bach!”

“Scared straight. Way too tiny for the gay world.”

“The real question those girls need to ask is ‘How tiny is his penis?’

Which brings us to another theory….the tiny penis. Is it possible Colton is hiding a bigger or shall I say “smaller” secret? That despite his big muscles, he is not actually packing any heat?

I just wish that Krystal Nielson was here to investigate and give us details….

Either way I have a feeling Fantasy Suites are gonna be a bit anti-”climatic” for the ladies this season.

Colton Underwood Enneagram breakdown the Achiever or the Opportunist?