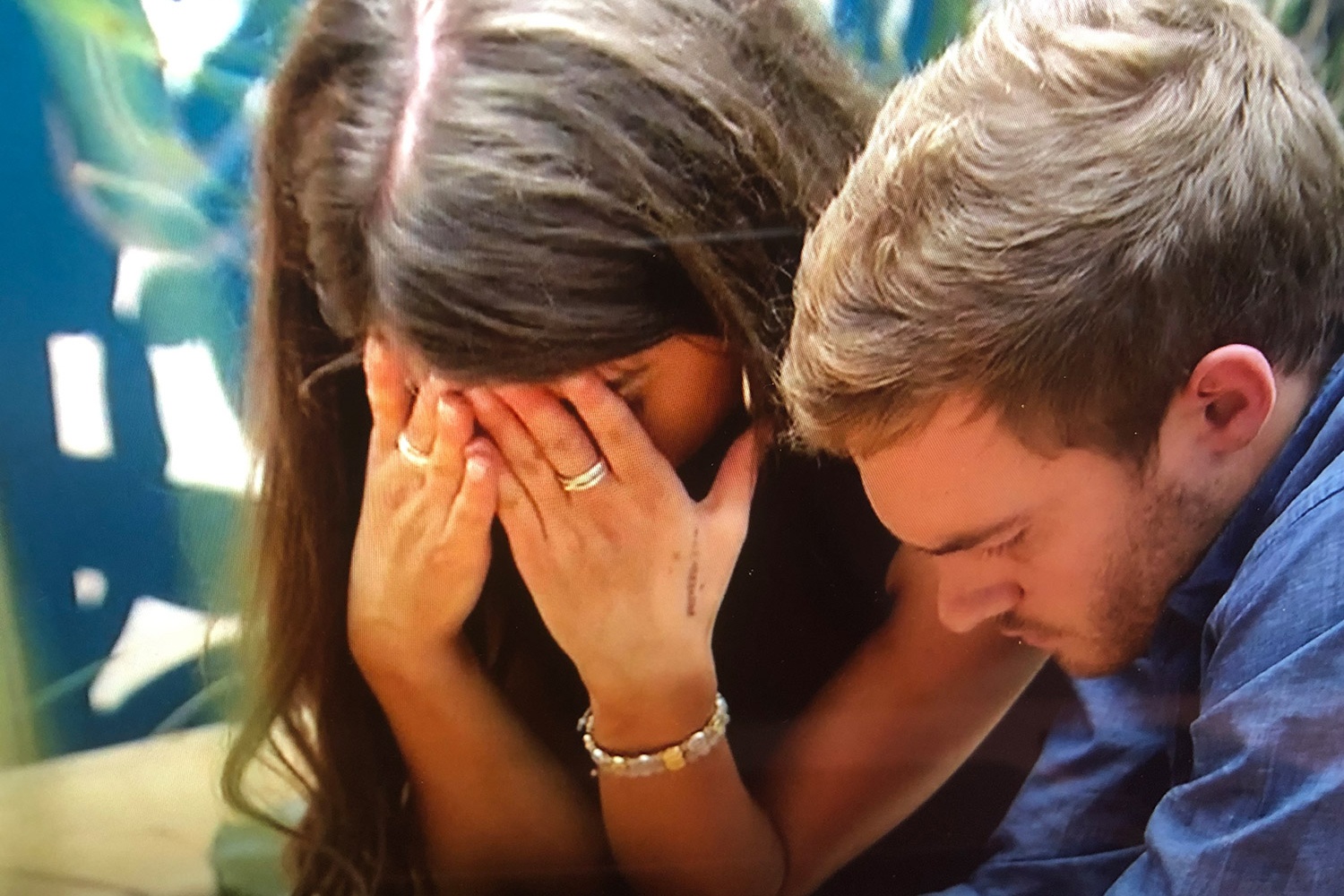 Part I of the Bachelor finale begins with footage from the shows time in the Australian Outback. Then Peter’s family: brother Jack Weber and mom Barbara and dad Peter Sr. arrive to Alice Springs, Australia, to meet with Peter, Hannah and Madison.

Peter briefs them on the finalists: Madison and Hannah Ann. Peter confides in his parents about the epic fantasy suite meltdown with Madison–yes, Madison evidently does not watch the show and did not realize that the lead sleeps with his 3 final ladies on EVERY season.

Madison essentially demanded Peter forgo the Fantasy Suite with the other two women and save himself for her–which under normal relationship rules makes complete sense, but this is The Bachelor and that ultimatum does not sit well with the family.

Needless to say the family appears skeptical of that relationship.

But Madison will have to wait! The first amazing lady to meet the Weber’s is 23-year-old drama-free Hannah Ann Sluss.

Hannah informs Peter’s father that she fell for his son night one after he gave her the first impression rose., ‘It was love at first sight.’

Mom, Barbara chimes looks to Peter’s dad and says, “I see you and me in them” and to say, “I feel like I’ve known you all my life.”

The family can’t stop gushing about Hannah Ann, but Peter is clearly torn.

Madison is still upset that Peter did not forgo the fantasy suite with Hannah Ann and Victoria telling him she feels he put his feelings above hers.

Peter tells her that he doesn’t know how she feels about him. The two shed tears as Madison confesses she doesn’t feel confident and at peace.

Before Peter betrayed Madison she claims that she would’ve said yes to a proposal. “Like, love isn’t the issue here, you know?” Madison tells him. It’s “all this other crap.”

Madison then meets up with Peter’s family. Peter tells his parents about the long talk they had before this, and Madison informs them that she’s in love with him, but is now taking a step back because of fantasy suite week.

Madison is VERY Christian, so Christian that she is saving herself for marriage. Peter is Christian, BUT has already had sex with not one but 3 Bachelor contestants (don’t forget the night of 4 times with Hannah Brown).

So Peter’s family, understandably, smells trouble. And I LOVE how the family knows how much Peter loves sex and has to bring this up, especially brother Jack,  in their pow wow with him.

“I understand that you’re very religious,” Barbara tells Madison. “Peter, he’s very spiritual, like I’m spiritual. But I just wonder how important it would be for you to have someone that’s on your same level of faith — because [Peter] is completely different. And Peter’s lifestyle, I don’t know if you’re aware of it, but he socializes, he parties.”

“She’s not there for you,” mom Barbara tells her son after Madison leaves.

And now Peter’s family is confused as to why Peter is even torn between these two women (and frankly so are we).

“You have a perfect girl right in front of you, and you’re going to risk that?” she implores Peter. “Hannah Ann loves you with all of her heart. Don’t let her go. Bring her home. Bring her home to us. We will welcome her with open arms. We will welcome her with all the love in the world. She’s a dream come true, and God has placed her there for you.”

Barbara has clearly handed out her final rose to adorable Hannah Ann and now she is sobbing and pleading with her son not to blow it.

–I love that Barbara feels she is also in this relationship and I’m terrified that Peter is going to let her down by picking Madison.

Peter confesses in his ITM that is sucks that his family isn’t supportive of Madison because he’s in love with her and wants her more than anything. Yikes!

Next too the awkward last minute date where one person isn’t feeling the same as the other: Peter and Madison take a helicopter tour together over Uluru and it’s clear that something is not sitting right with her.

Madison then pulls the plug before the contractually mandated finale,

“As much as we want this, I don’t know that we can, like, give each other what we need,” Madison tells him.

“To walk away from someone that you love, it’s like the worst feeling in the world.” she says.

Ok well that leaves us with only one amazing lady, aka Plan B, aka Hannah Ann Sluss. Will Peter propose to Hannah in part 2?

Part 2 is even more BRUTAL!