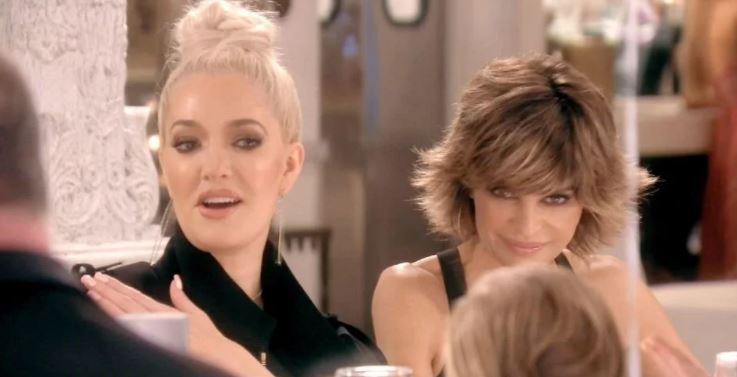 Attorney Ronald Richards has been charged with finding assets and money for the victims that Tom Girardi once represented and allegedly then embezzled. And he has been chomping at the bit to find out how Tom’s wife, Erika Jayne, managed to make $25 million dollars disappear over a period of a few years. Ronald has been engaged in a Twitter war with Erika’s co-star and fiercest ally, Lisa Rinna, suggesting that she knows more than she is letting on and may be deposed in an effort to find said assets.

Yesterday in an interview with Adam Newell from the Up And Adam, Ronald revealed that Erika and Rinna share the same business manager and why he wants to depose Rinna in the case.

“If you combine [the business manager] with the fact that Lisa Rinna’s been defending her, and she’s been vouching for her saying that she wasn’t involved, so if you’re gonna make a statement of fact, you better have a basis of knowledge,” he says.

“And so if Lisa Rinna is defending her, then we’re going to get testimony from her to see why does she have personal knowledge that Erika Girardi has no liability here.”

“Lisa Rinna has gone beyond just saying, ‘Hey, I’m giving her the benefit of the doubt or innocent until proven guilty.’ She’s gone to the further extreme and said, ‘She didn’t do anything. She’s basically innocent,’” he declared. “Well, is that just a lie or are you sort of grandstanding, or do you have facts?”

He added, “When I serve her a [deposition] subpoena, she may have a lawyer write me [and claim], ‘She knows nothing. She was just talking for TV.’ And I’m gonna have her sign a declaration under penalty of perjury that she was just basically talking, and she has no personal knowledge, and that would be acceptable to me.”

Ronald has been zeroed in on the fact that the two women share a business manager.

“The reason why I put that out there is we have proof that Lisa Rinna referred Erika Jayne to her business manager this year. And this particular referral is unusual because typically business managers are not referred by other talent because people like to keep their money private,” the attorney claimed.

“They don’t want all their friends using their same CPA or the same person counting their money. It’s like everybody then knows everybody’s business. That’s typically not a referral that you get.”

I suspect that what will be uncovered in this case is lots of Delaware LLcs, aka shell companies, and that money was flowing from one LLc to another. Delaware LLcs are almost always used when people are hiding money because the individual investors aka owners of the LLc are kept secret.

So a business manager could theoretically receive $500,000 from Erika and write it off as payment for services rendered ie accounting, book-keeping, taxes, etc, when in actuality he only took $50,000 of it and put $450,000 into a shell company owned by Rinna.

While there is nothing definitively linking Rinna to Erika possibly hiding money, just a lot of posturing by Richards. What I can deduce now is that Rinna’s company is called Rinna Beauty, but when I look closely Rinna Beauty appears to be under the umbrella of another company called SEL. The Business officer of SEL is ” STEVEN KOSS “.

I did discover that the accountant/business manager in question is Michael Ullman. Ullman is the registered agent for LRH Licensing which is Rinna’s business and he also serves as Erika’s accountant.

I think Erika and Tom always intended to file for bankruptcy after they drained the victims accounts, thus they knew they had to move the money through and out of their business accounts quickly.

And the 25 million that went from Girardi Keese to Erika Jayne’s company had to be a “loan” so it would appear that G/K was expecting a return on that money as opposed to just handing EJ the money for nothing which would appear as theft.

Sadly, I imagine the victims signed off on something allowing Tom to manage their settlement money.

And as audacious and illegal as the whole thing was, I believe Tom’s tight connections with big politicians and judges were supposed to be umbrella that would protect them.

Now Erika will be forced to show that her company really did spend that 25 million on legitimate business expenses or she could possibly face jail time. And Ron is hinting that opening those books could show money somehow went to Lisa Rinna.

It’s important to note, that as of yet, no criminal charges have been filed. Thus, the authorities at this point are still not going after either Tom or Erika. This is strictly a civil case.

“This innocent until proven guilty is a misnomer in this type of investigation,” Ron explained. “She’s not being charged criminally. This is not a criminal investigation, so there’s no presumption of innocence in a civil case.”

Ronald also says it doesn’t matter whether Erika actually “knew” whether Tom allegedly misappropriated any of the victims funds or not. And  just because someone doesn’t know money is stolen, they don’t get to keep it.

“For our purposes in this case, I don’t really care whether she knew,” Ronald said. “That’s like what we call a red herring. That’s like a feel-good argument. You cannot keep $25 million of other people’s money and then just take the position, ‘I didn’t know where my husband got it from.’ Okay, he got it from settlement documents and settlement payments, and you gotta return it, or a portion of it. We’re obviously not expecting to get all of it.”

I have a feeling Ronald has a bit more dirt on Rinna than he is letting on. He made a comment recently wanting to know who is paying Erika’s $500,000 in attorneys fees and hinted Rinna may know the answer. Hopefully this case won’t settle out of court and it will go to trial so we can find out what actually happened.

I will say, Ron may have nothing but a hunch that Rinna knows something and is just trying to intimidate her in order to get her to reveal whether or not she does.

Unfortunately, at the end of the day, Ron is just another attorney. If he gets his money in any way, this story will go away and we will never know the truth.

UPDATE: New reports that The trustee of the Girardi Keese bankruptcy is suing Erika Girardi for accepting more than $242,658 from a court settlement that should have gone to Tom Girardi’s law firm.

Essentially a man won a small lottery amount and decided to go on to one of those lotto TV shows to spin that wheel in an effort to win more. He sent his actress daughter instead. She won $5 million dollars and kept it. Her parents hired Girardi’s son in law David Lira to sue the girl. They won.

But Tom and David did something super shady. They assigned their attorney fees to their wives aka Erika Jayne and Toms daughter Jacquelin Lira. They stopped Erika’s payments but didn’t stop the daughters.

So Erica didn’t technically win the lotto, but she was receiving lotto winning payments.