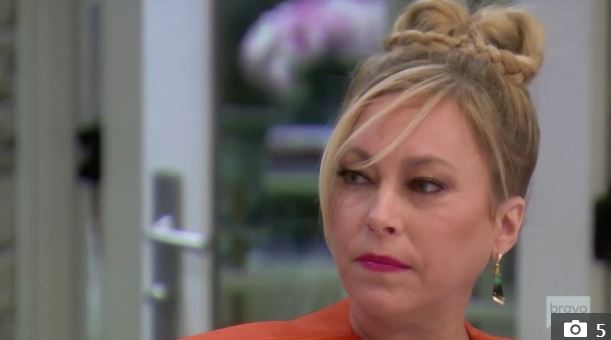 Erika Girardi definitely has the central storyline on this season of The Real Housewives Of Beverly Hills. But I don’t think this is the fame that she’s been looking for.

Everyone knows Erika is being accused of stealing millions of dollars from the victims that Tom Girardi represented in a civil lawsuit and evidence is mounting.

As a result, her co-stars are forced to attend fancy dinner parties where they grill the 50-year-old pop singer about what she knew.

Sutton Stracke has been the most vocal and articulate and well prepared of all of them. In fact, I am so glad Bravo gave Sutton a second season, because we are really seeing this Georgia steel magnolia shine with her traditional femininity, graciousness, and remarkable fortitude.

So on Wednesday’s episode of RHOBH 49-year-old Sutton put Erika in the hot seat questioning the timing of Tom’s alleged dementia at a party hosted by Kathy Hilton, 62.

‘Would you like to get sued?’ Erika asked Sutton.

‘No, of course not,’ Sutton replies.

‘If you want to talk about someone else’s health issues and you think that person isn’t gonna come after you, think again,’ Erika said.

Later in her confessional Erika really lays down a cryptic threat: ‘Sutton’s in way over her head. It’s not about me suing her. It’s more about,

”Careful what you say about other people that aren’t here.” He ain’t dead and gone, honey’.

It seems pretty clear that Erika is suggesting Tom has connections and could have Sutton physically harmed. Personally, I have always thought Tom has those sort of connections and the recent revelations that Jerry Heller was involved with Erika’s music business only reinforces that believe to me.

Heller was the executive behind a lot of the Gangsta’ rap that came from Compton in the 90s and has been accused of being super dirty.

Dorit Kemsley, 44, said Erika’s comments sounded like a threat directed at everyone. And to PK’s credit, he unleashed on Erika during his date night with Dorit.

Dorit cautions her husband to use the word “alleged”, but PK says what Tom did was not ‘alleged,’ but what was alleged was that Tom had ‘lost his mind.’ PK says he finds that ‘highly unlikely that guy has been actively borrowing money and doing what he has been doing for the last few years.

‘He suddenly can’t remember anything,’ said PK. He said Erika’s Instagram posting photos in lingerie ‘living her best life’ is ‘scratching the nose of the creditors.’

(Of course let’s not forget how PK left all of his creditor high and dry by declaring bankruptcy a few years ago–so I found his statements compelling, but also a bit hypocritical.)

‘If you ever call me a liar again,’ Erika said as she points her finger at Sutton. ‘I’m coming for you.’

In a confessional Sutton Stracke that asks:

‘Am I going to wake up with a horse’s head in my bed?’

Sutton then accuses Erika of threatening her and Erika responds that it wasn’t a threat, but a promise.

‘Don’t push unless you are ready to get pushed back on,’ Erika says.

Kyle interjects telling Erika that she can’t threaten people, but Erika reasserts she wasn’t threatening and that she was ‘promising.’

After all that ‘promising’, Sutton gets up to leave and Erika asks her where she was going. Erika pushed her chair back in and said bye.

‘I am not used to people like that,’ Sutton said as she stood next to the table. ‘And that will make me leave.’

‘Bye there is the door,’ said Erika.

I guess if anything does happen to Sutton we will know where to look. Lucky for Sutton the threat was witnessed by millions of viewers.

Erika has been acting like a cornered rabid animal that will do anything to get out of this. I’m perplexed as to why she agreed to do the show this season, but I’m glad she did.

The walls are closing in on her for sure as the courts have ordered her to return all of the money that was funneled to her by Girardi Keese which amounts to over $28 million for her purchases plus interest per trustee lawyer Ronald Richards.

So far she has yet to return a dime.