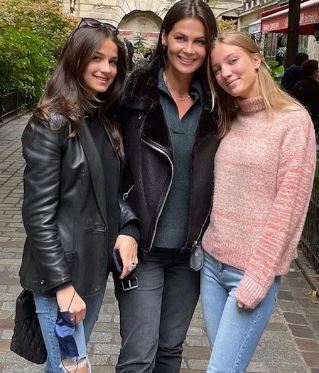 Julia Lemigova is a new breakout star on The Real Housewives of Miami. She has a fascinating back story that slowly unfolds on the 4th season of the show…so fascinating it required more than one post.

As to her ethnicity and origins: she was born and raised in the Soviet Union.

Julia Lemigova, is the daughter of a Red Army colonel. She said, “I read my father was supposed to be in the KGB, which is not true. He was a colonel, yes, but an engineer, involved in the aviation industry. So was my mother. It was how they met.’ They enjoyed a comfortable, middle-class existence. ‘I had a good education and my parents were quite cultured. There would always be trips to the theatre or to see the Bolshoi.’”

She was the last Miss USSR before the collapse of the Soviet Union and represented her country at the 1991 Miss Universe pageant in Las Vegas.

She moved to Paris since in the mid 1990s, modelling and then setting up her own business: a beauty company, White Russian, and a luxurious Joiya Spa in the city’s Rue de la Renaissance.

In 1997, she met multi-millionaire banker Édouard Stern and had an affair with him as he was still married although estranged from his wife, Beatrice David-Weill whom he had three children with.

Julia got pregnant and had a son Max in October 1999 who died at Necker Hospital in Paris on March 10, 2000, while under the care of his father. This story requires a separate post of it’s own because it is so involved and insane. So more on that soon.

Lemigova does not discuss the father of Victoria, who is now 20 years old, and attending the University of Richmond in Virginia.

Emma, 16, is the daughter of Christian Courtin-Clarins, who owns the cosmetic company Clarins.

In regards to her parenting style Julia says:

“I’m very Russian in my parenting. Very strict,” ….“’Maman poule’ [‘mother hen’] we say in Paris, where you always have this feeling you need to protect. Martina is more like a daredevil. The girls go to her for more fun things and sports. And she’s like, ‘Of course you can do it.’”

Julia and Martina Navratilova have been raising the girls together since they were engaged in 2014.