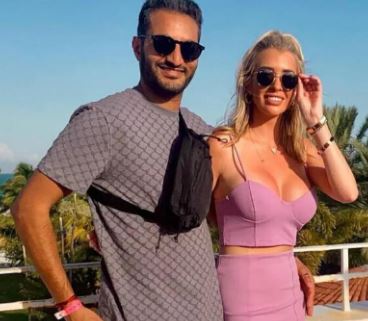 Love is Blind Abhishek Chatterjee a.k.a. ‘Shake‘ says he has found a new girlfriend Emily Wilson

One of the most hated men in reality television 33-year-old Vet Shake Chatterjee has found love 2 weeks after he made a fool of himself on the Love is Blind season 2 reunion. Not even an ounce of contrition or humility after saying some terrible things about fiancée Deepti Vempati’s personal appearance.

Shake slowly became the most hated man in America after constantly announcing that he was not remotely physically attracted to Deeps.

Deepti informed viewers on the reunion that Shake said much worse thing about her that never aired.

“I definitely heard from the girls and Shayne and Jarett; they all warned me that this is not a person you should marry because he’s talking about you this way behind your back,” ….. “I didn’t know the extent of how he was talking about me.”

Cut to March 17th, Shake continued to dig his hole even deeper and continued to take jabs at his ex in his announcement that he has found love.

Shake took to Instagram to announce the news in his caption.

“Good things come to those who w̶a̶i̶t̶ don’t settle,” he wrote alongside a pic from their recent outing in Chicago.

“When she was here this past weekend she’s like, ‘I want to meet your parents.’ I’m like, ‘I f—king want you to meet my parents,’” Shake told Us. “So my parents came in town, and we had a fun little afternoon and it just felt natural, it felt right. I don’t know where this is going to go but I can see it going the whole way.”

Additionally Shake is getting ready to launch his new podcast, “Love Is Blurry.”