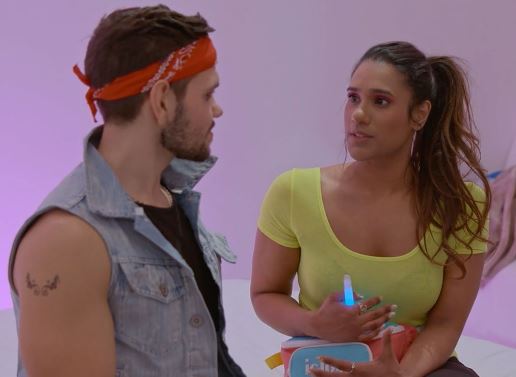 Love is Blind season 2 — After the Altar –Deepti Vempati and Kyle Abrams still together?

Love is Blind season 2 After the Altar aired this past week on Sept. 16th and it did not disappoint. I thought for sure it would just be fluff so I was not expecting much. But I was actually glued to my seat for all 3 episodes.

There were some genuine intense feelings and situations being resolved and one of those situations was the situation with Deepti Vempati and Kyle Abrams.

Recall Deepti spent her time on the show pursuing a relationship with fellow Indian Abhishek Chatterjee a.k.a. ‘Shake‘. And Shake went down in spectacular fashion on the finale and the reunion–so much so that he was not even invited to be appear on After the Altar. But don’t feel bad for Shake. He actually did find a girlfriend — a lucky lady name Emily Wilson.

But one amazing thing that came from the reunion was when construction worker Kyle Abrams said his “biggest regret” was not asking Deepti to marry him.

Cut to a year later and the two have clearly been hanging out regularly and aggressively flirting which was also evident by their social media postings, but oddly the two have yet to consummate their affection for one another. Kyle claims that he is reluctant because he doesn’t want to see Deepti get hurt again if things don’t work out, but honestly my alarms went off when I heard that.

I genuinely started thinking Kyle had also duped Deepti in an effort to remain relevant and on the show.

The two joined the other remaining couples for a weekend reunion and at the very end of the series Kyle takes Deepti out on a balcony and declares:

“I wanna just start a relationship—like a legitimate relationship with you,” ….”And be exclusive, instead of just, like, in limbo.”

Awwwww! I LOVE a happy ending especially for someone as sweet and lovable as Deepti. Congrats Deeps and Kyle!

UPDATE 9/19/22: Not so fast. Looks like the two have split! Perhaps my first instincts about Kyle were on spot. Sigh….