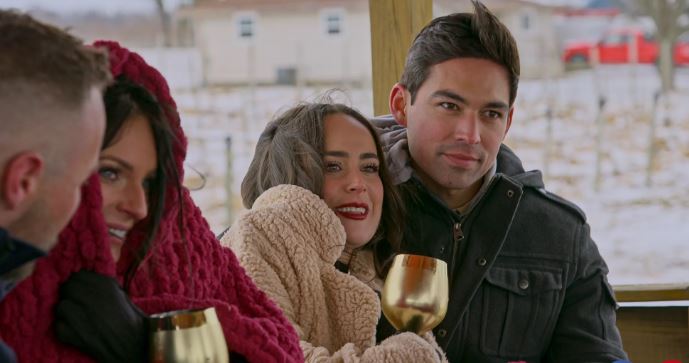 Love Is Blind After the Altar recently premiered on Netflix and revealed to fans the current status of the relationships on the show. One of those relationships was between Sal Perez and Mallory Zapata. The two looked like they were going to sail to the finish line on the finale, but things took a strange turn at the altar.

Mallory proposed to Sal and Sal replied “I don’t”“Honestly, Mal, I almost did take that leap with you.”

Sal later said to her, “Regardless of all of this, I hope that we can remain in each other’s lives.”

And Mallory asked if he’d be interested in continuing to date to which he replied, “I just need to take a few days,”  leading fans to think it was at least possible that they made up off camera and continued dating.

Mallory seems incredibly nervous and quickly it becomes obvious that she has not seen Sal in quite some time. It’s also clear that she is still hoping that they may rekindle their romance at this reunion. But then something happens at Natalie Lee’s ’80s-themed 30th birthday party.

Sal walks through the door (looking better than ever I might add) but he’s not alone. He has a very sexy, vivacious date on his arm. Her name is Jessica, “Jessi” Palkovic and she and Sal are clearly IN to one another and not afraid to show it.

Sal proudly introduced his little sex kitten to the group to which Mallory privately tells some people was an “uncomfortable situation.”

Perez explains to cameras how his romance with Palkovic began when the two met at a birthday party for his “sibling” Victoria. (Of course I spent a lot of time perseverating on why he referred to her as a sibling and not a sister–more on that later)

“The minute we met, there was something there,” he gushes in his ITM.

“She is such a firecracker. If she is in a room, you know that she is in a room. And she will just put a smile on everybody’s face. She is the nicest person that I’ve ever met, and honestly, I’ve never had more fun with anyone else.”

Anyhow, it seemed like Sal was avoiding Mallory the whole evening but as the party is drawing to an end he decides to pull Mal aside to make sure she’s ok — although his words were pretty brief, vague and uninspiring so much so that I can’t remember them.

Suddenly Jessi butts in and insists on also getting a moment on TV, I mean … with Mal.

Jessi said: “I’m not coming in here to intentionally make anyone feel bad. This happened so long ago, it’s like, so in the past. I was never worried about you.”

Sal said: “Mallory has a lot of places that she needs to grow. After this, I feel like I made the right choice at the altar, we weren’t right for each other.”

Yikes!!! “A lot of places that she needs to grow”!? I think when Mal sees this she will think she made the wrong choice at the altar choosing Sal. It’s clear that he’s still nursing some lingering resentment towards Mallory. In fact, it starts to sound like he is relishing this opportunity to parade this new girl in front of her as some sort of punishment for past sins.

“You guys didn’t have to say anything,” Mallory tells them.

Later in the show Sal talks to his very concerned sisters about getting engaged to Jessi and shows them the ring he’s bought. It’s clear that his sisters don’t think this is a good idea.

He also takes this minute to FINALLY tell us what it is that happened that made him feel so betrayed by Mallory on the original show.

“A week before our wedding, we had plans…I didn’t hear from her for two hours,” he tells cameras. He says that he was walking home and calling Mal on his cell phone after she flaked on him that evening when suddenly he saw her in a strange car. “Mallory’s in there with some random guy, drunk.”

Clearly, he was hinting that Mallory was cheating on him, but this is all the info he gives us and it’s not enough to side with him I’m afraid.

Salvatore comes off petty, sanctimonious and vindictive in my opinion. I was kind of on the fence about Sal in the original show that aired in March, and started to like him more towards the finale, but After the Altar confirmed my initial concerns about him.

And it doesn’t sound like I’m alone. A lot of fans took to social media to accuse him of hiring Jessi to paly the role of his girlfriend. More on that later.