Angela Zatopek responds to why she and Ben Patton broke up 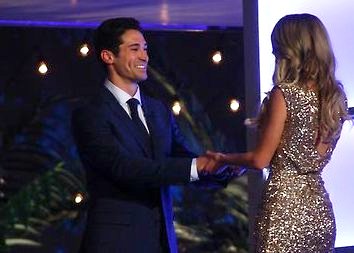 Ready for Love’s Ben Patton, 31 and 24-year-old Angela Zatopek got engaged on the season finale Tuesday.

But apparently the relationship ended before the finale even aired!

InTouch interviewed the Former Miss Texas USA /CBS Sports sideline reporter /Christian /self proclaimed  virgin  about why the break up happened. Here is an excerpt.

IT: Viewers just watched Ben choose you on Ready For Love and fans are online celebrating your engagement, but now you two are no longer a couple. What changed between the taping of the finale and now?

AZ: “I was not expecting him to propose to me at the finale, but I was head over heels, absolutely in love with him. We were coming off an amazing experience—such a high!—but our work schedules and not being allowed to see each other put a strain on our relationship. The proposal was on August 13. After that, we’d see each other once every two months and it’d only be for a day or two.

The show was originally going to be on in January, but just kept getting pushed back more and more. He’s in Dallas and I’m in Houston—it may sound like it’s close, but we really tried to honor our contracts with NBC and not see each other beyond what they planned for us. During the times that we did see each other, it was in secret.

I had like five different wigs that I’d wear because people would notice him, because NBC did so much publicity around the show. We came back to our lives, but couldn’t totally share our lives with each other. So we said you know what? Let’s call the engagement off because there’s been so much stress—so let’s just be friends and then just see what the future holds.

I have nothing bad to say about him, it’s all positive, it was just the distance and how much time it’s been. It was only like a month ago that we decided to break it off.”

“IT: Do you think you would’ve stayed together had the show stayed on NBC?

AZ: I don’t think so, because we did stay together while part of the show was being aired. We broke up because of legitimate reasons. I know that I was in it.”
Here is what Angela tweeted Tuesday:

@karaschrand That really means a lot. I tried to stay true to myself through this process & honor him above all else…thank you!

Ernesto and Shandi sadly also broke up prior to the finale airing!