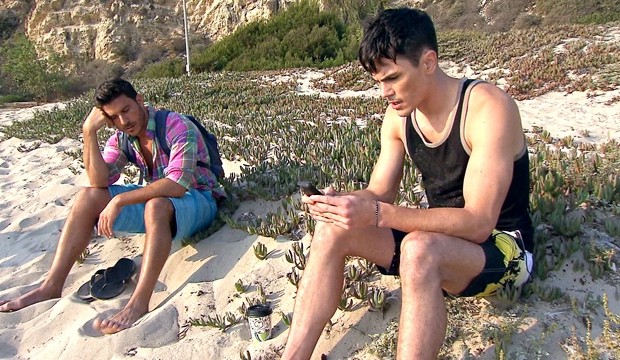 Season two of Vanderpump Rules has been a mega-situation!

Tom Sandoval cheated on girlfriend Kristen Doute with co-worker Ariana Madix, but even worse Tom discovered that Kristen cheated on HIM with best friend Jax Taylor!!! They were not kidding when they talked about how incestuous relationships were at SUR!

So its no SUR-prise that the finale is going to be explosive.

The preview/ first look shows the SUR co-workers coming together for a big photoshoot. Both Tom and Kristen are absent. Lisa indicates that she asked Kristen not to come to avoid any unnecessary drama, suggesting that Kristen may not work there anymore.

Tom eventually shows up late after losing sleep all night over the news about Kristen’s cheating. He asks Stassi if he can talk to her. Kristen manages to convince Tom that Jax had some serious ninja cellphone skills and was able to fabricate the text messages coming from her phone telling him to help her cover up the encounters. Stassi suggests that Tom is in serious denial not wanting to believe the truth–ummm yeah! She then proceeds to rub salt in his fresh wound by telling him more details about the encounter saying that Kristen was being so loud Jax had to cover her mouth while Tom slept in the next room.

Jax shows no remorse about sleeping with Tom Sandoval’s girlfriend Kristen–a situation that happened TWICE–once while Tom was asleep in the other room.

Lisa Vanderpump steps in to help handle the epic Tom and Kristen infidelity situation– This is where she really shines.

So, we know that Kristen actually filed a police report against Stassi for the bitch slap proving her rage is real. This should make for an epic season 3, but it looks like Stassi Schroeder is out since she has moved to NYC to be with boyfriend Patrick Meagher.

Jax is reportedly dating new girlfriend, model Carmen Dickmen aka Carmen Leslie, who is rumored to replace Stassi for season 3.

The two have been spotted out multiple times.

Did Kristen Doute get fired from SUR?