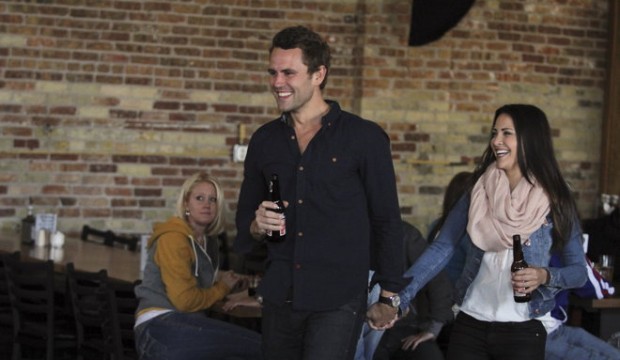 Tonight Bachelorette Andi Dorfman heads back to the “United States” for coveted Hometowns!

She starts with contestant Nick Viall and heads to Milwaukee to meet his freakishly large family!

I am trying to understand how Nick’s mom gave birth to 11 children. I mean she looks fantastic and way too young to have 11 CHILDREN!!!

I suppose being the oldest of 11 kids has taught Nick a lot about dealing with relationships and family. Just when I thought he was getting cute and vulnerable he told his mom he was Andi’s “favorite”! and lost me again!

This guy is way too cocky! I think he underestimates how much Andi LOVES a jock. Yeah Josh seems a little bridge and tunnel…all football, all family, but newsflash! This is what Andi is hot for Nick!!! Just because she is a super smart lawyer doesn’t mean she wants a rocket scientist! So take it down a notch. You might lose.

I can’t even begin to keep track of Nick’s siblings, but one very young and adorable sibling grilled Andi about whether she was in love with Nick!!! WOW! Talk about uncomfortable!

Next she heads to Arlington, Iowa (it’s gotta be a weird juxtaposition going from Ghent Belgium to Iowa!) to vista Chris Soules on his large and lucrative farm. He shows her his giant tractor.

Andi acts impressed but as hot and charming as he was driving it I knew he didn’t have a chance. I could see Andi freak a little about the idea of living on this Iowa farm. It just seemed a little too John Mellencamp Small Town for her.

His family was also super sweet and supportive and Chris scored serious points with the airplane banner message “Chris loves Andi”, but this relationship was DOA. No chance Andi was movin’ to the country to be a “homemaker”/life-partner to an Iowa pig farmer…sigh.

And I’m sure people have heard the rumors that Chris is a shoe-win for next Bachelor but I have some concerns. I think he is an excellent fantasy husband in many ways, but the Iowa farmer thing is gonna be a tough sell to America, not to mention to the vegans.

Plus the latest news several arrests…including a DUI could put a damper on the fantasy image.

Anyhoo, next we head to Dallas to meet the family of Marcus Grodd…a bit odd after last weeks giant disclosure of his abusive relationship with his parents.

“Its a weird dynamic” he told Andi.

It makes sense that Marcus grew up so sensitive with an intense need and desire to help others (enneagram 2) after he told us about his difficult childhood last week.. “My father left…suitcases packed — I never understand fully why he left — why he blamed me and my mom”.

We did not meet his German father Klaus Erich Grodd –understandably

We also met his gorgeous brother Conrad, 36 who lives in San Francisco and works in finance and sister Cathy Grodd, 34 who lives in Dallas and was a very successful model.

So it was heart-wrenching to see Marcus booted tonight, but interesting in light of rumors that ABC is looking at him to possibly be the next Bachelor.

But I don’t know ABC…I am so worried about his abandonment issues! He is so sweet and so cute and caring and  think he will be a superb Bachelor in 5 years, but he needs a little more hair on his chest!

Keep his name on file.

And don’t worry Marcus, you always have a very promising career in stripping to fall back on.

Next, off to Tampa, Florida to see Josh Murray.

It’s hard to pretend like Josh is not the favorite. And it cracks me up HOW hot Andi is for athletes. I mean she is so smart and charming and such a catch. I’m sure we were all expecting to see her end up with a Jewish doctor but forget it! This girl LOVES her an athlete! A big sweaty guy who can throw and catch a ball and spends way more time in the gym than in the library.

I could not believe that she was so in to Josh’ diatribe on baseball. He is just such a “dude”. It all just felt a little too Bruce Springsteen Glory Days for me—talking to Aaron about what football teams he was interviewing and talking about his family and his glory days on “his” baseball field.

I am guess she has some daddy issues and loves the guy who will protect her. But all in all I do think the two have serious chemistry and conversation is way over-rated anyway.

Julie Montagu, Mapperton and the Earl of Sandwich