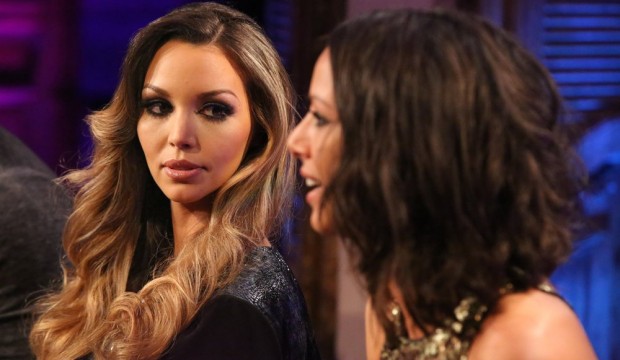 Kristen Doute and frenemy Scheana Marie starred on Watch What Happens Live with Andy Cohen tonight and we actually got a little bit of dirt. Apparently people on Twitter were accusing Kristen of having plastic surgery and I do admit she looked great. Instead she claimed that she had had botox–although Kristen has admitted to botox before.

Funny considering her age—as for Kristen’s age (which she did not admit on WWHL and has been a mystery for years)……it took us a lot of digging to find this because she is the only member of the show who won’t give up her age. Last year she claimed “in my 20′s”, but she can’t claim that anymore. She actually turned 31 in February.

Jax Taylor tweets in and accuses Kristen of being drunk. So obviously they are on great terms.

Kristen also reveals that she did not find out about ‘Miami girl’ (Annemarie Kunkel) from Instagram. She confessed that Jax had actually told her about the indiscretion which is interesting considering Jax and Tom were best friends on the trip. This probably is one reason that Jax is not happy with Kristen. But really—has everyone not learned that you NEVER confide in Jax?

Other VP Rules plastic surgery situations: Jax is going to get a nose job this season and we know that Stassi Schroeder had a chin implant in High School.