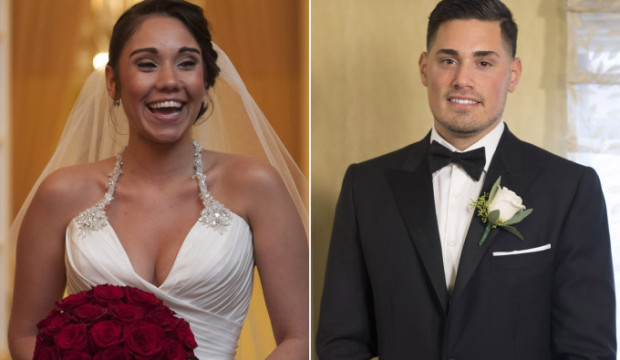 Just in time for the Married at First Sight Season 2 reunion a shoe has dropped in the budding relationship of Jessica Castro, 30 and Ryan De Nino, 29.

The couple had enormous chemistry at first, but things quickly took a turn and the two began fighting about everything from Ryan cheating and stealing to Ryan accusing Jessica of being spoiled and selfish.

In the end the two shockingly decided that they wanted to stay married. You could see that even the matchmakers that set them up were apprehensive about the relationship working.

Ryan said in the finale: “This experiment was just the first chapter of our journey and ultimately we get to write the book.” Well I wonder if that “book” included a “restraining order”, because yesterday Jessica took out a restraining order on her new husband of 6 months. The last straw for Jessica was when Ryan allegedly told her, “I plan on killing you and your family.”

De Nino responded to the restraining order by posting:

The court date is July 13th and Castro’s attorney Marc Rapaport said his she is “considering all her legal options including potential claims against A&E.”

On the Reunion Staten Island business owner De Nino storms out of the taping of the show’s reunion after Manhattan, N.Y. receptionist Jessica Castro allegedly accuses him of drug use.
More Married at First Sight

Ben Higgins opens up about his ex-girlfriend Shaelin to Kaitlyn