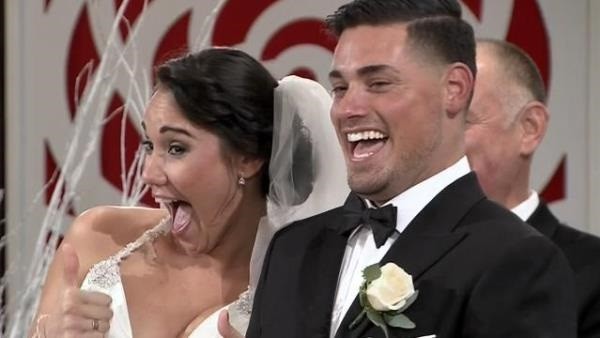 Tonight was the Married at First Sight Season 2 reunion and we got to catch up with the 3 couples who decided to marry each other sight unseen several weeks earlier. One of the two couple who decided to stay together, Manhattan, receptionist Jessica Castro, 30 and Staten Island business owner Ryan De Nino, 29 after he allegedly threatened to kill her and her family.

Last we saw of the couple they were enjoying the rest of their wedding cake and discussing their future together but this week things were already over.

Jessica claimed that right after the show wrapped Ryan wanted some space and wanted to live separately. She also claims that she did not hear from him on Valentine’s Day. And then she said that when she did see him she found a Valentine’s Day card from another woman!!!

Then she claimed that the two have not spoken or seen each other in 2 weeks. The confrontation was very uncomfortable especially in light of the allegations that just came out yesterday that Jessica took out a restraining order on Ryan. It sounds like things began to nosedive after the show finished taping and the arguments got even worse.

Part 1 of the Reunion ends with host Kevin Fraser asking Ryan if he has another girlfriend. Ryan gets visibly defensive and previews for next week show Ryan walking out on the interview.

Allegedly next week Jessica also accuses Ryan of doing drugs, which sadly I do not doubt for one minute. This situation should get interesting.