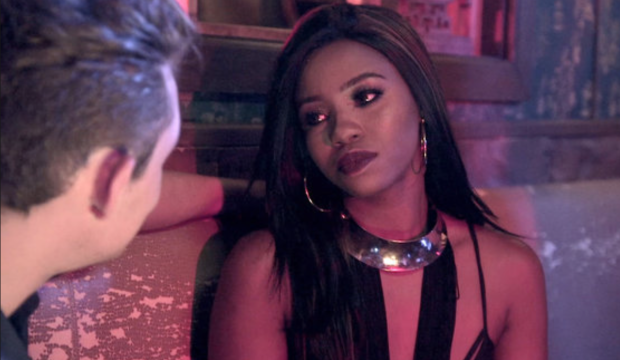 On Monday night season 6 of Vanderpump Rules premiered and we saw that the cast was seriously “pumping” up the drama for fans as promised–especially 38-year-old Jax Taylor.

Castmates accuse Mr. Jax of having sex with fellow SUR-ver Faith Stowers, 27. To back up a second, if you recall Faith was a cast member of the show last year, but her air time was sort of short-lived and uneventful. Despite being a strong, sexy, sassy, Southern woman of color, her luster was eclipsed by all of the drama swirling around the OG cast.

But she found her way back!!! –through the weakest link no doubt—in fact everyone seems to find their way back to the show via the show’s weakest link—Jax Taylor.

She will play a large role on season 6 since her alleged sexcapade with Jax creates serious turmoil for Jax and girlfriend Brittany Cartwright, 28.

Adding to the scandal Faith thinks she may even be pregnant as a result of the impulsive rendezvous — and I suspect may be regretting it for more reason than one.

Stowers admits to the sexy-time at Scheana Marie’s birthday party.

One source told Page Six, Stowers was “upset she wasn’t relevant on the show years ago,” while an insider said she “used Jax to get back in [the spotlight].”

Oh Faith, really! Was it worth it?

Making the tryst even more disturbing the incident took place as Faith was working as a home care aide for a 91-year-old woman!

I can’t stop thinking about this poor 91-year-old woman laying there and witnessing the indiscretion as one of her last visuals on this earth!

For the love of God! This shouldn’t be the last thing someone sees before they head off to the pearly gates to meet Jesus.

In regards to whether or not Faith is pregnant? Well I think the world can breathe a sigh of relief because she definitely does not appear to be pregnant at the present time per her super sexy Instagram pics.

Anyhow, the insiders went on to dish on the sitch between Jax and Brittany.

“Brittany and Jax were on-and-off after the cheating, but Brittany did go back to Jax and loves him.” The insider added that show producers “forced them to get back together” after “a very rough spring and summer.”

“She’s trying to work through their relationship and she wants to make it work,” the insider added. “Jax is trying to be faithful and good to Brittany.”

I can’t wait to see how this situation plays out!