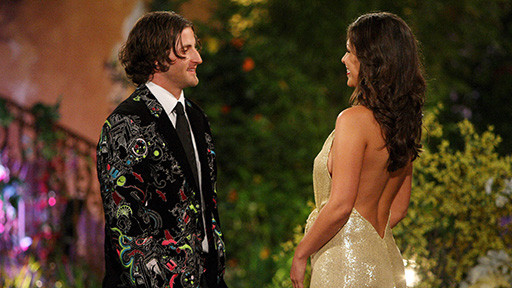 This isn’t just a schoolyard taunt. This has the makings of a potential legal situation! In the January 16 issue of Star Magazine, it’s reported that former Bachelorette Season 4 winner Jesse Csincsak is set to sue Bachelor creator Mike Fleiss for being a bully. And Csincsak even tweeted about the story, urging his followers to check it out, so it looks like it’s more true than mere tabloid fodder.

“This is a simple lawsuit of ‘leave me alone,'” says Jesse.

It’s not surprising Fleiss is a bit up in arms about Csincsak’s latest endeavors, since he has been revealing several behind-the-scenes tidbits about the Bachelor/ette franchise via various blog posts and via his formerly named Bachelor/ette Beatdown web show (now called the Reality Smackdown). I’ve noticed his Smackdown doesn’t hold as much appeal anymore because, as Csincsak is now claiming, Fleiss scared off most of the former castmates that used to do the show with him. It’s a tough call. Csincsak is definitely trying to make money off of his knowledge of the show, which he is likely under some sort of contract not to do. But you’d think there’d be a statute of limitations on that stuff. And it’s not like Csincsak is revealing hidden secrets of the show…. he’s most often just discussing how the producers and the shows’ editors can bend the truth a bit and/or make someone on the show seem more like a villain than they really are. But, I mean, don’t we all already know that? I say, POWER TO THE PEOPLE. Let Csincsak make some coin! His Beatdown show was so fun to watch!! And now the Smackdown isn’t anywhere near as interesting because the more well-known contestants have been traded out for some lesser knowns. And, well….I want to hear what Dave Good, Natalie Getz, Kiptyn Locke, Jesse Kovacs, Chris Lambton, Tenley Molzahn, Ashley Spivey and Wes Hayden have to say, dammit!

We will keep you posted on this situation!!!!