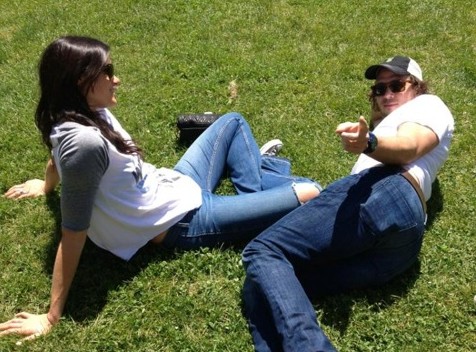 Ok, Ok, Ok….so we were wrong. Over the weekend, we speculated that 1) Ben Flajnik and Courtney Robertson had broken up and 2) that Courtney Robertson would likely choose to do Bachelor Pad 3 (whether still with Ben or not). You can read our thought processes behind both speculations here and here. But, apparently we are wrong on both accounts……..for now.

Unfortunately (fortunately?), Ben tweeted on Monday that he spent all of last weekend with Courtney in Los Angeles. So, it appears that they are still together:

Had a great weekend with @bugrobertson in LA this weekend! A pic of us eating sushi at her favorite place. All is well with the two of us in case you care :/

And, regarding whether or not Courtney (or Ben) would be doing Bachelor Pad 3, we just saw this from Wetpaint: “They wanted them together, as a couple,” a show insider confirms. “The producers worked them really hard. They knew getting Ben and Courtney would add a huge dose of sex appeal and controversy to the show.”

“They said no,” the insider confirms. “Ben and Courtney were both in firm agreement. Neither of them was happy with the way The Bachelor was edited to make it look like Courtney was this huge villain and Ben was a fool for falling for her.” The source adds, “Neither one of them wanted to take the risk they’d get the same treatment on Bachelor Pad. No amount of money was worth it to them.”

Only hours ago, Courtney confirmed our report, tweeting “Nope” to a fan who asked if she was doing the show. Today, Ben tweeted that he has no plans of returning to the small screen for Bachelor Pad 3.”Not in a million years,” he said.

So, there you have it. We have fun speculating, and hopefully you do too!

Speaking of speculation, the rumors that were flying around yesterday about Roberto Martinez being the next Bachelor have been snuffed (slightly) by an article posted today on USWeekly.com. It just sounds like Life & Style’s 100% green light announcement yesterday may have been a bit premature. But, Roberto still may in fact be the next Bachelor. We shall see!!