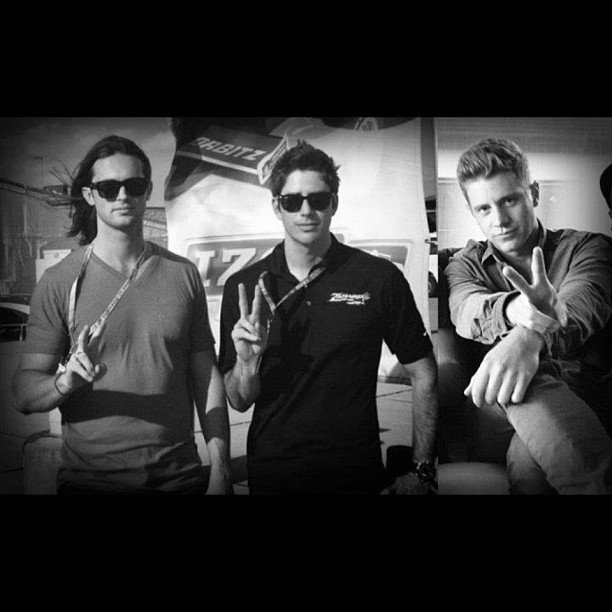 If you’re not familiar with the term “greasers,” then you really need to read “The Outsiders,” by S.E. Hinton. In the book, there were two rival groups, the Greasers and the Socs (short for “socials”), that were divided by their socioeconomic status.

Basically, the Greasers were the poor kids and they’d get beat up all the time by the rich kids. And, in the book, you really ended up rooting for the Greasers because they were the underdogs.

Now, in the case of the comparison I’m drawing to Emily’s group of guys, I’m not focusing on money, but more on brawn and style, which seem to be two differentiating factors between the groups that are presenting themselves in the house currently. I mean, have you seen these two videos from The Bachelorette website?

First, we have the Greasers (aka The Hipsters) playing croquet:

Next, we have some of the Socs (aka The Football Team) measuring each other’s biceps:

It just seems like there are “The Hipsters” and, as Arie even labeled them in this week’s episode, “The Football Team” in the house. So, we’ve got:

I’m not sure where Chris Bukowski fits. I’d say he’s more on The Football Team, but he and Doug don’t really get along, so maybe he’s on the Team but has been momentarily benched. John Wolfer is another wild card. I’d say he’s more on The Football Team too, but after getting the dreaded 2-on-1 date, we all know his days are numbered. And, Kalon McMahon? He’s just a spoiled, bratty pretty boy that is “too good” for either group, so he’s just a loner, who, again, will likely be getting booted soon.

Now, what’s surprising is that Emily seems to be currently favoring (slightly) The Hipsters over The Football Team. Maybe it’s because Brad Womack would have been more of a member of The Football Team group and she’s trying to swerve the other way? Maybe because she’s said she’s “a big nerd” and The Hipsters are more nerdy? Maybe she’s into minds over muscles? Who knows! But it’s an interesting dichotomy. And it’s been a surprise to me. If I were to have guessed before the show, I would have thought Emily would go for the macho dude over the slightly more nerdy guy in the hooded sweatshirt.