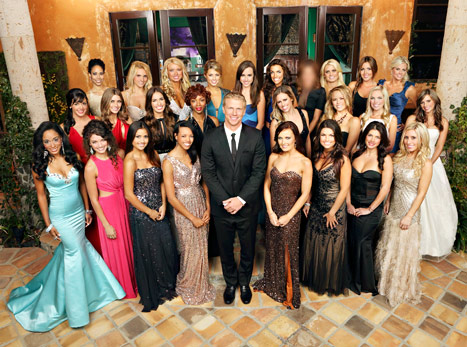 Welcome to THE LOWE DOWN for The Bachelor Season 17 episode 1. Although the typical end-of-year hiatus from all things Bachelor was pleasantly broken up by the completely unexpectedly amazing premiere of Bachelor Canada, I’m still uber stoked that The Bachelor is back, and, more importantly, that our fave Chris Harrison is back.

For this season, we’re cleverly coining our usual roundup of blog recaps “THE LOWE DOWN.” In fact, we’ll probably use the term THE LOWE DOWN all season long, since our site is about SITUATIONS and those are exactly the types of things you want to get the low down on.

Anyhow, without further ado, here are some highlights from the blogosphere from Monday night’s Big Premiere:

Once I was over the initial shock of the room full of beautiful women, I was able to sit down and start talking to them on an individual basis. I was blown away by not only how attractive the women were but how intelligent and accomplished so many of them were. I’ve always said that there is nothing sexier than a woman’s intellect – and I was certainly not disappointed by this group. I will say that moving from woman to woman and keeping up with each conversation was exhausting. I wanted to be attentive to everyone so I was really focusing on each woman but it wore me out! There came a point during the evening when I had to get away for a few minutes by myself to eat and decompress.

Paige from Bachelor Pad was back, and… then she wasn’t again. I have to say I was a little surprised she didn’t make a bigger impression on Sean and at least stay the first week. Sean is very wary of those that showed up just to be on TV and whether Paige was there for that reason or not, she definitely started behind the eight ball and never made up for that in Sean’s mind.

Against the blonde, blah memories of Sean, emerged a surprisingly kind, mature, polite, humble, sincere and loving family man.  If you have any doubt, just rewind the scene of him trying to deal with a drunk Lindsay who emerged from the limo wearing a full on wedding gown with veil.  She tried to kiss him.  She tries luring him into a wedding dance.  She has clearly consumed one too many beverages.  Sean could have made out with her and dumped her at the rose ceremony.  Instead, when Lindsay tries to defend her boldness by declaring that “she has balls,” Sean quickly responds, “I really hope not.”

Bam. Sean is FUNNY too.

Catherine: so pretty and chill

Selma: most likely to be hit on by former contestants
Read more at BachelorExpert.com

Can you believe that we are already experiencing the muscular grace of Sean Lowe as he maneuvers this amazing journey to find love? How about that opening Season 17 montage that symbolically tugs at the hearts of the viewing audience with the hope that all of us not watching the BSC championship game will remember how Sean was unlucky in love during Emily’s season? I’m not sure what all was discussed during the 31 minutes we were forced to trudge down memory lane because I was distracted by the oiled up beefcake lifting weights in front of me. Seriously. I haven’t seen that many gratuitous mid-section shirtless shots since the inaugural and 2.0 seasons of Hotter Than Crap Brad Womack.

I would like to tell you that I hope Sean Lowe is happy with his journey on the Bachelor. That I hope he finds love. And I hope that each of his 27 women ends up fulfilled.

But that would be a lie.

Because I don’t actually care if Sean finds love. All I care about is myself, and it’s clear from these pictures that not one of Sean Lowe’s 25 bachelorettes (save for Kacie Boguskie) has ever read Possessionista. Because if she had, she would most certainly NOT be wearing these Bride of Frankenstein prom dresses to what is arguably the most important night in their whole famewhoring lives. (Not that there’s anything wrong with that.)

Essentially, every girl arrives at this central thesis: Sean is the greatest most awesome person in the history of western civilization. ALSO? He is the perfect man for basically everyone, everywhere, all the time. I must say though, I’m STUNNED with the minimal amount of shirtlessness in the montage. I imagined this season taking place exclusively on the space between Sean’s two pec muscles.

OH NO! At one point during the montage, they actually showed a rose falling to the ground!! DOES SOMEONE DIE? OR DO THEY JUST FALL OVER? IS THAT SYMBOLISM? WHAT DOES IT MEAN???

But let’s get back to Sean. Good old Sean. He’s actually not that old. So let’s stick with just Sean. So just Sean comes from a nice little family w/cute niece and nephew who call him Seanie. And all of America is swooned. They could have ended the show right there. At least they could have skipped that corny ROCK scene where Sean says something like I’m a rock. Or was it more like she’ll be my rock and I’ll be hers? I wasn’t paying too much attention, I was WAY too distracted by the awful camera work, shooting that couple getting married (what the heck???) and back to Sean, all blurry then sorta in focus and half not. What the heck? That was worse than the random lost cats in back alleys in Ben’s season. Who fed him that line anyway? Did it come along with Elan’s shirt??

First off, HOLY SHIT OPENING MONTAGE.  Not since Brad Wifebeater were we treated (or mistreated by) such a gratuitous amount of man knockers.  Credit to Strawberry Lemonade for what must be a hellish routine of playing golf and lifting bibles, because homeboy is jacked up.  That said, Chris Harrison had to be on so many mushrooms when he planned out Strawberry Lemonade’s work out routine.  It was:

I am so happy The Bachelor is finally back! Although I was not a huge fan of Sean on Emily’s season of The Bachelorette, I do believe there is a lot more to him than what we got to see then. And I love getting to know the new contestants! And I needed to move on from my (I guess you could call it that) obsession with the Jef/Em “on-off-on-off again-maybe on again” relationship. But the main reason I was excited for this new season to finally start? LIVE TWEETING! I am so addicted to live tweeting with BachelorNation producers, alumni, contestants, fans…

So in honour of all of them (you), I am going to do a “tweet-captionning-best-one-liners-recap” – look out for some of the best tweets of the night throughout the recap.

1. Yes, we let our kids watch the show.  We wanted them to see themselves, Uncle Sean and the pretty ladies.  We explain things as the show unfolds and will continue to let them watch it as the season progresses.

2. At the beginning of the episode, I really was doing face time with Sean on the i-Pad (that wasn’t manufactured) .  He had been in California a few days and the first episode was about to tape…it was the last time I talked to him for several, several weeks (actually, almost 2 months).  I really missed him when he was gone.
Read more at Mix and Match Family

To summarize, though, Fifty Shades of Grey almost made me hate reading. And reading was my Bachelor before Bachelor. It’s what I turned to as a child when none of the other kids would play with me. It’s my lifelong love. I’m a writer, for crying out loud! So, for a book to be so bad it almost makes me say “Sionara, love,” well, that’s pretty darned bad.

It’s unclear whether or not Sean’s obvious early preference was just coincidence or if it’s a deeply ingrained fetish for chestnut tresses, but he couldn’t raid Chris Harrison’s flower stash fast enough to distribute “first-impression” roses to virtually any brunette within stem’s reach. Quick-thinking contestants should have been tearing apart suitcases in search of emergency wigs, raiding the bathroom cabinets for cosmetic hair-darkening agents, or wrecking the pantry for abandoned bottles of food coloring to increase their chances of catching Ben’s eye. By next week, we wouldn’t be surprised to find any remaining blondes huddled in a dark bedroom, passing a contraband can of Krylon Hammered Brown Outdoor Spaces secreted to them by a sympathetic groundskeeper, hearing in its gentle aerosol hiss the promise of temporary salvation.

Let’s get this thing started. The season kicks off with America being re-introduced to Sean. He should seriously be wearing an American Flag, or Statue of Liberty costume, he’s the genuine all-American guy. Let me not waste any of your time and just say that Sean is the perfect guy for this show. He likes long walks on the beach, has a six-pack, and a smile that would make any woman and even some men melt. In all seriousness, I wish my friendship with Sean started a lot earlier on Emily’s season rather than later. He is truly a genuine guy and wishes only the best upon others. THIS MAN DESERVES LOVE! We can’t wait to watch him (hopefully) find the love of his life, and even more so, we can’t help but wait to see what train wrecks are in store for him.
Read more on Bachelor.TV

Sarah: Being patient, confident, and the smile after she got the rose. Heart melt.

Kacie B: she was so natural and unassuming, humble and comfortable talking to Sean and confident in her reason for being there. And to set the record straight, she has every right in the world to be there, it is in no-way unfair.

No other real stand-outs to me…though I am sure there are more to come.

50 shades of Ashley: Mother Theresa. That got awkward.

We have finally arrived at the mansion. I am trying really hard to focus but I just keep wondering if Sean would date a jewish girl (me) and it’s throwing off my equilibrium. The ladies are ready to walk down the cobblestoned and wet driveway (again, no way to prepare for this ish) and the meet and greets begin. With the exception of a couple screw-ups, the girls were fairly calm. Unlike our season, where Lindzi’s horse made brown on the driveway, Jenna completely messed up a Ben quote, sashes, hats, raps, whatevs.
Read more on Bachelor.TV

3 thoughts on “The Bachelor Season 17 episode 1 recap: Your faves weigh in”