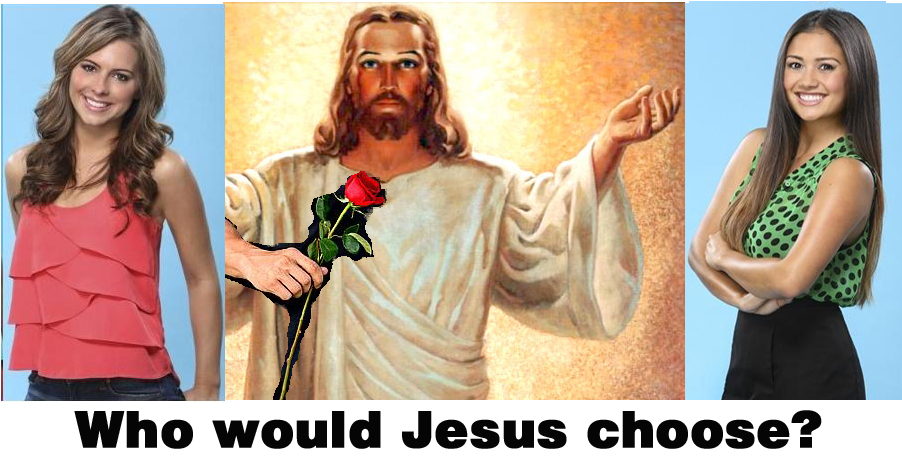 Sean Lowe has without a doubt been the most Christian Bachelor in Bachelor history. He consistently professed his devotion to JC on Emily Maynard’s season of The Bachelorette, but all the JC talk has been oddly absent this season. I mean Sean is choosing a life partner for the love of God and we haven’t heard a peep about the religious orientation of either Lindsay or Catherine! We knew Emily was a devout Evangelical Christian, we even knew Jef’s parents were on “a mission” (although the word Mormon was strangely edited out), but we don’t know if Sean’s religious beliefs are compatible with either amazing lady finalist.

Sean confirmed his Christianity in an interview with Going Beyond Ministeries. He’s been an active Christian since the 6th grade, and is a member of The Fellowship of Christian Athletes. He is also a “born again virgin”. Clearly this man is devoted to JC!

And clearly he is looking to JC for some guidance on who to choose. We know Christians like to recite the mantra “What would Jesus do?” when they are conflicted about an important decision. So, if Jesus was choosing a life partner on a reality television show in just 9 weeks, who would he choose? Without any info on either lady’s religious orientation, we would say Jesus would choose Lindsay. We suspect Jesus would want Sean to pick the lady that was ready and willing to relocate to a Dallas suburb and pump out some babies, and be completely devoted to her marriage ASAP! And from interviews it doesn’t sound like Catherine is ready to pursue that calling. In fact, Catherine wants to move to New York City and pursue a career.

We don’t think Jesus would advise Sean to pick Catherine as a life partner simply because the two appear to have different callings. Sean’s calling is to be a State Farm Insurance Agent in a Dallas suburb and a dad — immediately, Catherine’s calling appears to be to become a successful journalist in a big city. Catherine’s sisters confided in Sean that Catherine:

” had a strong desire to pursue a career in New York and that she may not be ready to settle down.”

Catherine’s family seemed to be warning Sean that she might not be ready for marriage and kids right now.

Lindsay, by contrast, appears to be ready and willing to settle in a midwest suburb. She is the 24-year-old substitute teacher from North Carolina that appears to want a simple quiet life centered around family.

Well, I guess we will see tomorrow night which amazing lady Sean picks. In the meantime, we are certain he has been busy talking it over with Chris Harrison and Jesus. We just wish we could have seen the most Christian Bachelor in Bachelor history looking to JC on who should get his final rose!

1 thought on “Catherine Giudici or Lindsay Yenter: Who Would Jesus Choose?”