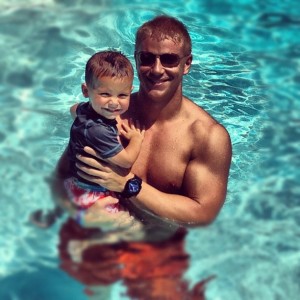 We are all anxiously awaiting Monday night’s finale of the Bachelor. If any Bachelor can make it to the alter it’s Sean Lowe. The 29-year-old fitness model and devout Christian is clearly eager to lose his “born again virginity” and start a family with his new life partner of 9 weeks. And according to a source close to the couple and HollywoodLife.com Sean wants to be a dad as soon as possible and he and his new fiancee are planning on having kids immediately.

“He and [fiance] (who shall remain nameless) have already talked about having kids right after they’re married,” the insider adds.

“These two want to make it official pretty soon” an source told Life&Style magazine. “Everyone knows they want to hurry up with the wedding so they can, you know, get physical.”

“Sean and his fiancée have incredible chemistry,” the source added. “I’m sure they’re very excited about getting more familiar with the physical side of their relationship.”

“She doesn’t mind that he’s saving himself for marriage — she thinks it’s admirable,” the source added. “But she wishes they could get married super fast.”

So the winner must be taking a lot of cold showers to cool off until ABC pays for her kick-ass televised wedding in approximately 6 months.

We know Sean is a very dedicated Christian, but we are still curious about the religious orientation of his two final amazing ladies. Obviously, this is an important part of starting a family which inspired us to ask the question: Who would Jesus choose?