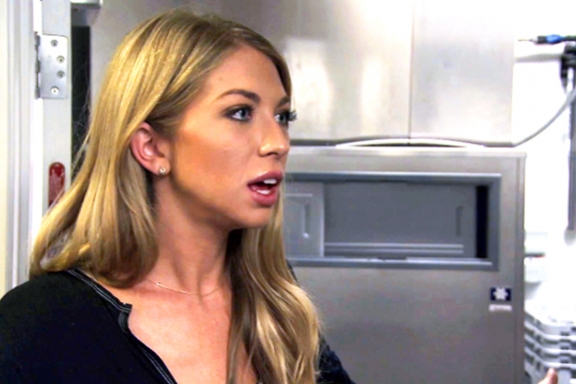 There is nothing we love here more than when two reality shows collide into one giant situation! And tonight on Vanderpump Rules’ thats exactly what happened when we enjoyed the first crossover event where The Real Housewives of Beverly Hills seamlessly transitioned into Vanderpump Rules. It was the greatest crossover event since Murder She Wrote crossed over with Magnum P.I. two decades ago–a Penny Farthing fave.

Tonight Lisa Vanderpump hosted a party at SUR for her Real Housewives of Beverly Hills co-stars and needless-to-say the drama was ‘pumped’ up several notches via the dueling situations occurring simultaneously during the taping of the two shows!

The Real Housewives of Beverly Hills arrive for a dinner party at SUR where we immediately see some familiar faces behind the bar and serving food and cocktails–and one of the many situations happening is that apparently everyone from Vanderpump Rules has just been to see the Optometrist because they all seem to have a new pair of prescription glasses (who knew the cast was so blind), although we quickly learn Jax glasses are just for looks–figures.

Scheana Marie is exiled to the other side away from the party because of her situation with Brandi Glanville’s ex-husband Eddie Cibrian.

So Brandi is of course drunk and throwing herself at Jax Taylor. She recently tweeted Jax to clear things up… “@BrandiGlanville: @mrjaxtaylor ur cute and lovely 2 me we have the same modeling agent but I wasn’t hitting on you!!!! Promise!” I know

The Real Housewives are arguing about “racism” and someone being a ‘bully’ and ‘living on planet trash’–blah,blah,blah, Jax thinks RHOBH star Joyce is LaToya Jackson–amazing, and Kristen is totally preoccupied with rumors about boyfriend Tom Sandoval and bartender Ariana hooking up.

She has been grabbing Tom’s cell phone to examine it for calls and texts from Ariana and she finds some serious evidence including a 15 minute phone call. As annoying as I find Kristen to be, it really does appear that she is on to something here, especially after Katie’s shocking tarot card reading which suggests the rumors are true.

So Kristen confronts Tom outside during his break and Tom once again denies anything happened, but this time Scheana seems to drop another hint….that the hook-up occurred in Las Vegas. In fact, she says “I don’t know what happened 3 years ago in Vegas”. This lends a bit more cred to the claim even though the Vegas detail was clearly a slip up by Scheana. Oops!

Stay tuned for more this situation!