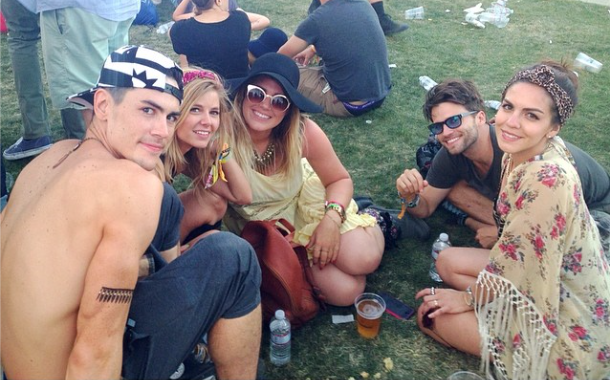 The cast of Vanderpump Rules is heading off to Coachella this weekend! Let the situations BEGIN! Remember the slew of situations that ensued last year for the cast? That is where Tom Sandoval allegedly cheated on girlfriend Kristen Doute with new server Ariana Madix.

Well this year Tom and new girlfriend Ariana are there together and looking happy as ever despite all the tabloid fodder suggesting Tom is already cheating. Tom Sandoval just got himself into some epic situations a few weeks ago in Miami with Jax BTW.

Kristen Doute rifled through Tom’s phone last season and found some texts from Ariana about wanting to “go back to Coachella”.

Anyhoo looks like these two DID go ‘back to Coachella’ AS a couple!

Star Jax Taylor is there with fellow SUR-ver Matt Cutshall who actually hooked him up with ex Carmen Dickman (according to our sources.) He tweeted yesterday:

Latest on Vanderpump Rules!! Here are some texts via the gang: W/ @ariana2525 30 ftfrmwherOutkastis abt2 perform… They’ve been the soundtrack 2my life since #southernplayalisticstyle LiFEis GuD! — Tom Sandoval (@TomSandoval1) April 12, 2014

From Ariana: #babealert on the left

desert and beer for breakfast

Bravo gave some more details about the SUR crew at Coachella in their blog:

“Yolanda Foster‘s daughter Gigi Hadid and Vanderpump Rules stars Kristen Doute and Jax Taylor were all on hand to take in fun, sun and plenty of great music. The trio also stopped by the Lacoste pool party to cool down: Gigi was seen hanging with Blanda Eggenschwiler and Joe Jonas, while Kristen and Jax (who admitted to hooking up while both were dating other people this season on Vanderpump) seemed perfectly friendly while posing for photos.”

Can’t wait to hear about all the situations that what went down this year!