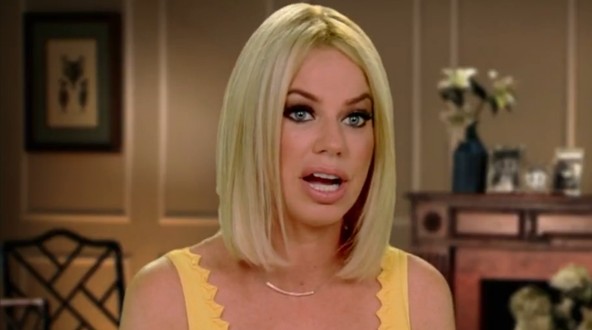 Caroline Stanbury is one of the stars of Bravo’s new docu-drama Ladies of London. She clearly has the respect of the other women due to her high standing in London’s elite social circles.

And it is literally in her blood. Stanbury actually comes from affluence. She is daughter of venture capitalist Anthony Stanbury, who was managing director of Jaeger, the high-end fashion group, and Elizabeth Stanbury, who ran a cashmere knitwear business—born Caroline Alice Stanbury on April 28th, 1976.

Elizabeth is also part of the landed Vestey family and old friend to Sue Ferguson, the second wife of the Duchess of York’s father, Major Ron.

Caroline was educated at the acclaimed and expensive Westonbirt School in Gloucestershire and started out working in public relations and personal styling.

It was while she was doing PR that 24-year-old Caroline met actor Hugh Grant– 40 at the time and they began secretly dating.

Caroline has quite a passion and talent for spotting valuable modern art. The talent moved her to start the Gift-Library, a worldwide online shop in 2008 with friend Goga Ashkenazi. The company now has annual revenue of £ 2 million and ships to 80 countries.

Currently the Gift-Library has already grown to three stores and over 53 employees.

Caroline is married to investment banker Cem Habib and the two live in a four-bedroom house in Holland Park in Wentworth Surrey with their twin sons Aaron and Zac and daughter Yasmine.

Her husband Cem Habib has worked in finance for years. He was employed at Cheyne Capital Management and previously, he was a Principal, Portfolio Manager, Head of Research, Investment Adviser, Director, and Member of the Investment Committee at Altedge Capital.

Four years ago the couple had an annual salary of £1.6 million per the Standard.

She famously dated Prince Andrew, The Duke of York in the summer of 2000 and Hugh Grant, Sylvester Stallone, and Manchester United footballer Ryan Giggs.
But don’t let her pedigree fool you. Caroline has a mouth like a sailor and she is definitely gonna be a situation this season!

Who is Annabelle Neilson?

UPDATE: 3/03/2015: Season 2 of Ladies of London has wrapped but Caroline Stanbury is having serious drama with her business

1 thought on “Who is Ladies of London’s Caroline Stanbury?”