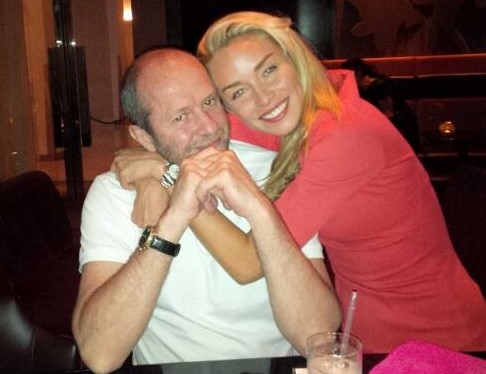 One of the most interesting stories to play out on Bravo’s new series Ladies of London is the story of Scot Young (boyfriend to 30-year-old model Noelle Reno) and his acrimonious divorce from wife Michelle Young. In fact the series begins right as Scot is being released from prison after 3 months after he refused to produces documents to the court showing his financial situation.

The 51-year old real estate and technology mogul claims he is broke but you can understand why his ex-wife doubts his claim.

He’s a balding middle-aged man–sort of non-descript, shabby-looking. So it’s hard to believe that Noelle is that hot for this ex-con who has no cash and no real status to offer her. In other words, the image he presents on screen has to be different from the real story.

And certainly Scot would want to make sure he looked poor for cameras since this was filmed prior to the judge making a decision.

So who is Scot Young and what’s the real story with his ex wife and his wealth?

Scot didn’t start of rich. In fact he began with so little money that the two lived with Michelle’s parents before they married in 1995.

The 2 met over 2 decades ago in 1988. Scot was an ambitious young entrepreneur, while she worked in retail.

But during their 11-year marriage, Scot Young, acquired tremendous wealth and social status as a “fixer” for wealthy businessmen and Russian oligarchs.

So what in the world is a “fixer”?

It’s just as shady as it sounds. A “fixer” is a person who uses his influence to make arrangements for important people in serious trouble–usually via illegal means.

So needless to say, all this “fixing” made Scot a bloody fortune.

The couple had palatial homes, a yacht, even servants. In fact they had a nine-bedroomed Palladian mansion in Oxfordshire, a £ 6 million beach house in Florida, a £ 3 million yacht, and £ 5,000 meals.

Michelle contends that her wedding ring alone cost £ 1 million and when they went out for meals they would spend £ 5,000 a time.

Daughters: Scarlet, 21, and Sasha, 19 and were going to the very expensive £ 5,375-per-term Francis Holland school in London.

But everything changed 8 years ago in 2006. In November 2006 Michelle took a phone call in their Miami house from a friend/representative of her husband that he had lost all his money in a “meltdown”–sort of odd that Scot did not tell her this himself.

Michelle was understandably suspicious of this shocking claim. (Sounds like someone was making a pre-emptive strike, knowing he’d be divorcing her soon but wanting her to think they were broke first.)

That was the beginning. As a result Michelle and her daughters have been living in a rented two-bedroom flat. The youngest, Sasha, had to complete her education in a state school after the money for her expensive prep school was cut-off.

“My daughters have lost their education,” she said. “I feel he has robbed them   of their future.

“We have had to move four times in five years – all our personal belongings   including books, clothes, pictures, are in storage, we are in complete   limbo.”

“We are living from hand to mouth. I share a room with my younger daughter, I   don’t take them anywhere, I don’t even know where or how they get their   clothes and I don’t go shopping at all any more.”

In 2013 Young was jailed for six months for repeatedly refusing to reveal his finances.—definitely sounds like he is hiding them

Scot only ended up serving 3 of the 6 months and it looks like it paid off because in November Michelle was awarded a paltry 20 million. It’s still unclear exactly how much money Scot has and if he is hiding it offshore but his odd behavior from beginning to end certainly suggests that he is hiding something.