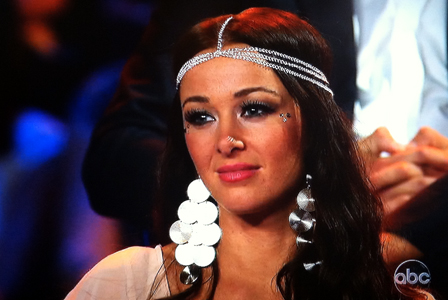 I’m not entirely sure where to begin here with this new information….

So, here’s the situation ….. Jamie Otis won us over on Ben Flajnik’s season of The Bachelor with her awkward and aggressive impromptu lap dancing and make-out sessions with Bachelor Ben. She also won our hearts by appearing on the finale of Bachelor Pad 3 wearing STICKY FACE JEWELS and equally awkward bedazzled Pocahontas headgear earrings.

As if that was not enough to put her in reality television Hall of Fame she began dating reality show lead, fresh-out-of-a-reality-show-engagement Ready For Love star Ben Patton last year, although it sounded like that relationship was more of a “misunderstanding” than an actual “relationship”–kind of like her relationship on The Pad with Chris Bukowski turned out to be.

So there is a NEW mega-situation in the world of Jamie Otis. She apparently  appeared on fyi network’s new show Married at First Sight on July 8, where three pairs of single strangers marry each other “at first sight”.

The show employs a team of experts—a sexologist, a spiritualist, a psychologist, and a sociologist—to match contestants with their “ideal” mates. The contestants agree to marry based on the experts assessments alone and then meet their life-partner’s AT the altar!

So Jamie Otis, 27 married Doug Hehner, 31, a commercial sales rep and lifeguard from New Jersey. But it doesn’t sound too promising because during the premiere in her ITM she claims: “This is the worst feeling. Obviously I wasn’t like, ‘What a knockout!'” she said in a voiceover. “I couldn’t help but look at his family, because they were, like, beaming, huge smiles, looking at me, and I just happen to be not attracted to the guy.”

But according to the Twitterverse her reality show love may be growing on her:

On the plus side J.O. you looked fabulous!

If you missed it you can watch the entire episode here! it’s amazing! Enjoy!

Stay tuned for more on this situation!

Do you want to know if they are still together?