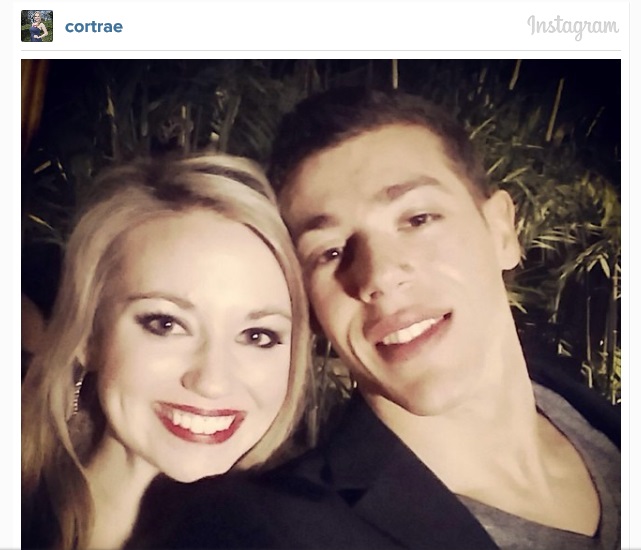 Tonight we got to see Married at First Sight: 6 months Later and see what couples were still together and what couples had ended their marriage. All three of the couples married ‘at first sight’ on FYI network’s crazy and controversial new reality show based upon the expert advice of sexologist, Dr. Logan Levkoff; spiritualist, Greg Epstein; psychologist, Dr. Joseph Cilona; and sociologist, Dr. Pepper Schwartz.

The first couple was 26 year-old Burlesque Dancer from North Carolina, Cortney Hendrix and 27 year-old EMT from Brooklyn, Jason Carrion. Cortney took the hot seat first subtly teasing the audience that they may not be together. Then Jason came out and the body language was a dead giveaway.

Jason was practically sitting on Cortney’s lap for the whole interview! Awwwww. And he had a freshly shaved head for his time at the Fire Academy.

Sexologist Dr. Logan Levkoff, revealed that neither Jason nor Cortney expected to have sex right away and thought that they  would be focus on building a relationship first. But we do know they had sex on their honeymoon! Heyooooo!

Jason also revealed that his mother passed away after dealing with terminal cancer. Cortney revealed that she finally met Jason’s mother after filming ended right before she passed. “She saw that I’m going to take care of her son and her son is fine.”

The other interesting update from them was in regards to Cortney’s family. Cortney’s family had understandably protested her wedding. Cortney said doing the show caused her a lot of stress with her family. But luckily she had taken new husband Jason home to North Carolina with her over 4th of July weekend and now her family LOVES him and approves of the marriage. PHEW!

I did think it was interesting that no one’s father “gave them away” at the wedding! In fact, the only two who had any family at all at the wedding were Jamie and Doug.

Carrion is getting ready to graduate from the Fire Academy and the two have moved into an apartment in Park Slope in northwest Brooklyn.