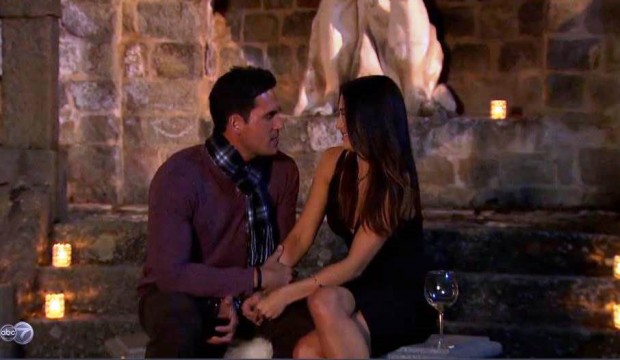 We just learned the devastating news about the big breakup between Bachelorette and former Georgia Assistant District Attorney Andi Dorfman, 27 and fiance Josh Murray, 30 yesterday. The two decided to end their 8 month courtship. The two seemed made for each other–they valued the same things, loyalty, family, success, but were different in just the right ways–Andi was serious and cautious and Josh was fun and light-hearted and they lived 5 minutes away from each other in Atlanta!

There had been rumors about problems for months but the couple put up a good front up until the very end even tweeting family photos over the Holidays.

They also spent New Year’s Eve together in Atlanta, at a charity gala benefiting the Children’s Healthcare of Atlanta.

“[In 2015] I will…. Love harder. Forgive quicker. Live without regret. Find the a slice of goodness in everything and everyone and Never Ever will I give up!” she wrote on social media. “2014 was an incredible year that changed my life. Thank you to everyone who supported and loved me! I have never felt more blessed in my life. My heart is full.”

At the Monday night premiere of The Bachelor 2015 they looked happy and excited about planning their future together.

As to clues that the relationship was in trouble…..

There had been reports of fighting for months. Initially they were reportedly fighting over the fact that Andi had had sex with Nick Viall just before the proposal to Josh and that Josh was very jealous and controlling. Andi had also turned down a stint on Dancing with the Stars which could have been due to Josh’ jealousy.

I also noticed that Josh Murray was posting more and more photos with his family and without fiance Andi in the last few weeks and the photos they did post look staged. Also remember when his brother Aaron got engaged at the end of October and was blasting it on Twitter Josh was oddly silent.

Andi Dorfman and Josh Murray have officially broken up!