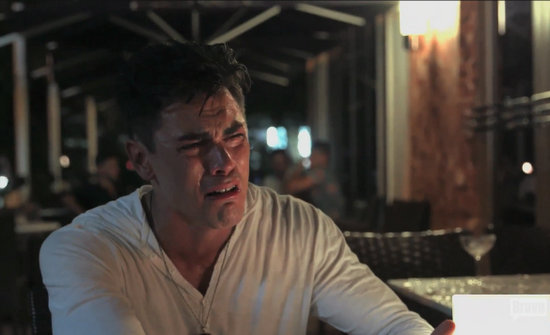 Tonight’s episode of Vanderpump Rules was INTENSE! As if Jax’ gay boyfriend from his Miami modeling days was not enough, Tom Sandoval and ex Kristen Doute have a serious heart to heart that leaves Tom balling about the break up and certainly makes it appear that he still has feelings for her at least at the time this was filmed.

The conversation leaves Kristen very hopeful and leaves Ariana, very nervous. In fact Ariana is panicked the entire time that Kristen is going to do something during the trip to destroy their relationship.

Tom tells Kristen that he was actually happy during the six years they were together! (Tom’s loyalty is his best and worst quality). Kristen took that as a sign he may want to get back together.

“There was a time that I loved Kristen, and you know, there is a little part of that that stays with you.”

During her interview, Kristen said she now knows that Tom still loves her and if Ariana weren’t in the picture, they’d have a relationship. So she admitted that her mission now is to get rid of Ariana.

“After 6 years…if we cant be happy w each other maybe we can find happiness with other people. Those times I will never forget. There were times when I thought we were gonna spend the rest of our lives together. It was so hard for me to go through.”

I think the show does not accurately show how tough the breakup really was on Tom since all we see is him glowing and gushing about new girlfriend Ariana.

During her ITM, Kristen claims that now she knows that Tom still loves her and if Ariana weren’t in the picture, they’d be back together and then claims that she wants to get rid of Ariana. And the end of the show implies that Kristen is going to find Annemarie Kunkel and have her come and confront Tom face to face.