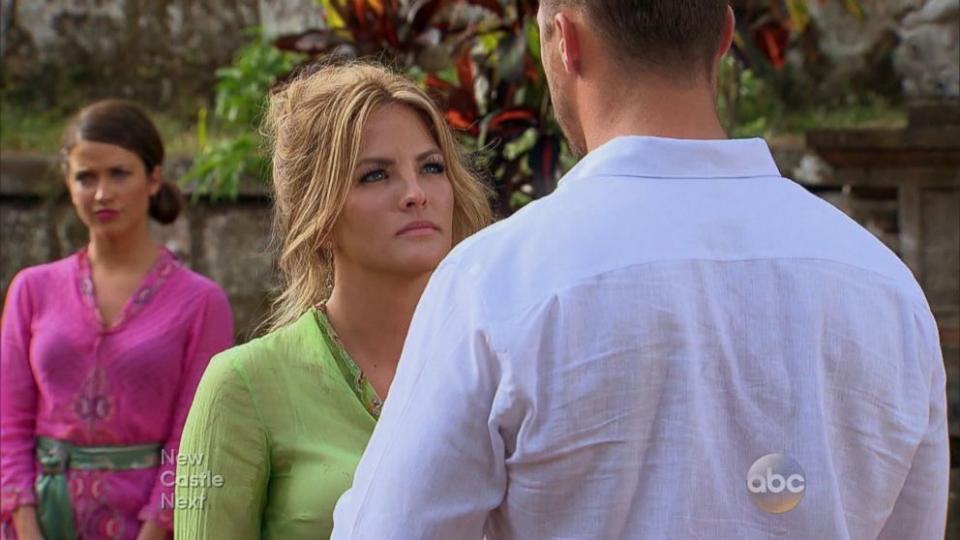 Tonight Chris Soules took his 3 remaining amazing ladies to Bali for the big Fantasy Suite situation and it turned into a Fantasy Suite SIX-uation–at least for Chris and Becca.

For those of you not familiar with the Enneagram its an ancient system for mapping personalities. It contends all people come from 1 of 9 different points of fear and motivation.

That said both Chris Soules and Becca Tilley are Enneagram 6’s which made for a GIANT Six-uation this week in Bali.

We know that Becca has never been in love before which is likely the result of never trusting someone enough to be vulnerable with them. And now she is in the position of having to “trust” someone who is dating multiple women and can not contractually tell her how he really feels!

Sixes crave safety and security. They also have problems with autonomy when in stress and making decisions. And what could be more stressful than finding a life partner in 9 weeks on a reality show?! So Chris all season has been feeling VERY insecure about finding a girl who would really be happy in his tiny town of Arlington, Iowa. He is also a bit insecure about his blue collar job as a farmer.

This coupled with the fact that Chris is looking to an authority figure outside of himself for guidance and this is really a decision he has to make on his own.

So I think he really likes Becca the best. But Chris projected these fears that Becca would not be happy in Arlington onto Becca in the Fantasy Suite tonight.

But Becca is ALSO a 6!!! So expressing this insecurity to Becca who is already a bit wrought with anxiety (especially about her virginity) made her spiral into her own insecurities and second guess her own feelings.

The double-six relationship is tricky because the two bring out the best and worst of each other.

“Strong Six couples understand each other deeply and make a point of trying to understand what they don’t understand. Two Sixes usually bond with each other very quickly sensing a kindred spirit, and there can rapidly develop a playful, bantering, buddies-in-arms kind of excited collusion and relief, like two kids who have found each other in the woods and can help each other to safety. A double Six couple will have a sense of shared secrets and values, of intellectual stimulation and questioning that they find both useful and stimulating.”

“Trust is extremely important to both Sixes, and once it has been established, it allows them to relax and enjoy themselves as they do with few others. Trust allows double Six couples to think aloud to test ideas, voice doubts and suspicions, and to discover what they really feel about various things. ……Sixes are generally not adept at talking about their feelings directly, so their feelings and attitudes are mostly expressed in their actions and in the depth of their dedication and steadfastness.”

See what Chris says about why he picked Becca over Kaitlyn.

Sixes have the hardest time getting in touch with their own feelings or talking about those feelings, but they are the best at expressing their feelings through actions and 9 weeks is not really enough time to have a lot of “action” under your belt. So Chris in a way, ironically, acted like an authority figure to Becca and she took his insecurities to mean she should not fall for him.

Unfortunately this may have spelled the end of their budding relationship. Stay tuned!

As a side note—at least sources are claiming Chris did NOT disappoint in the bedroom. I think the 6’s loyalty and desire to please makes them excellent lovers.

Enneagram breakdown of Andi Dorfman and Josh Murray relationship. Will it work?

1 thought on “Chris Soules and Becca Tilley have an Enneagram 6 off in Bali!”