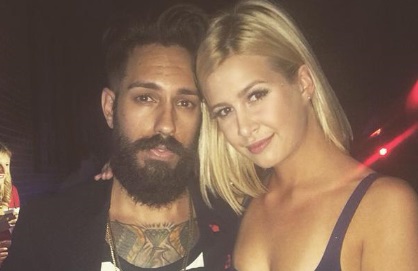 Has Carmen Dickman moved on from boyfriend Jax Taylor?

Wow I never thought that Vanderpump Rules stars Carmen Dickman and Jax Taylor would officially break up but it looks like Carmen has moved on at long last!…to a guy name Kurt Benz. And the couple is hanging out with the Vanderpump Rules gang–at least stars Kristen Doute and James Kennedy.

Carmen posted this tweet with this picture of Kurt:

“Sometimes I want to kill him, but majority of the time.. I love him kurtbenz”

Kurt even said “I love u” to Carmen yesterday on Twitter.

So who is Kurt Benz?

He is a 24-year-old model in Los Angeles, California—perhaps he will be the latest SUR-ver to join the cast for season 4 of Vanderpump Rules!He is 5′ 10″ and 150 lbs so quite a bit ‘smaller’ than Mr. Jax, but then again it’s hard to be bigger than Mr. Jax.

Looks like Kurt was also a club promoter in Las Vegas and a Real Estate agent at Luxe Estates & Lifestyles. So I guess Jax isn’t the only one who can have a lover in Vegas.

Jax waffled back and forth between girlfriend Carmen Dickman in West Hollywood and other girlfriend Tiffany Matthews in Las Vegas last season.

But here is an interesting clue that the coast is not entirely clear of Mr. Jax Taylor. Kurt posted this telling tweet:

“If a girl is pretty, single and on her shit, you got about one week to blow her mind before her ex tries to make it right for the 89th time.”

I think it’s safe to say that Jax is lurking somewhere behind the scenes and still pursuing the 23-year-old law student.

Kurt looks like a bit of a bad boy himself.

Insiders told us the straw that broke the camel’s back on the Jax-Carmen relationship was how Jax mistreated Carmen’s dogs after a night of partying. Hopefully Kurt treats her and her dogs better than JT.

It also looks like Carmen is getting ready for a trip to Europe.