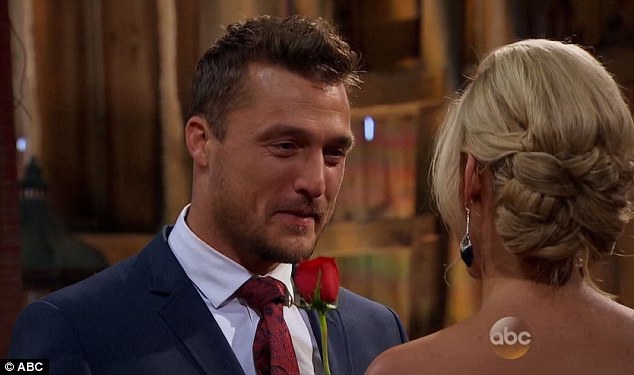 When Bachelor Chris Soules, 33 proposed to  29-year-old Chicago-based fertility nurse Whitney Bischoff it seemed a little anti-climatic especially after his father famously said, “Whitney’s a sure thing, but I think Becca is who he wants.”

The ending felt forced and obviously producers have a lot riding on a successful lifetime love connection happening in 9 weeks so you can’t blame them for trying to ensure the show ends in a proposal. Not to mention Chris knew whomever he chose would have to move to his tiny town of Arlington, Iowa, population 9,000.

So I have been curious since the finale to know if the engagement was fake.

And during an interview on The Dan Patrick Show, Soules said that his engagement on The Bachelor to Whitney Bischoff kind of was fake.

“Well, we got engaged on the show.  I mean technically yeah [on whether the engagement was real]. She had the ring, the whole nine yards. We tried to make it work. We tried to figure things out in the real world. It’s much different in the real world than it is on TV, you know, on a television show. You kind of get the opportunity to, you know, actually experience real life together,” Soules said.
“They don’t pressure you to do it [get engaged]. I think the whole experience itself lends itself to like making you feel like you want to do that. And in the end of course there’s the final rose and, you know, it’s a really weird experience and it’s hard to explain unless you’ve been through it,” he says.
The two recently ended their 6-month engagement. And there was a lot of speculation that they broke up because Chris had a crush on his Dancing with the Stars partner Witney Carson.

As far as where they are at now he said:

“Well there really is not much to say. I mean it was a relationship. She’s a great person and she’ll be a friend for the rest of my life and I’ll always care about her” …..”Just didn’t work out. It was two people that were mature and went into a weird situation, came out, tried to make it work.”
Chris Soules’ season
Photo Source: ABC