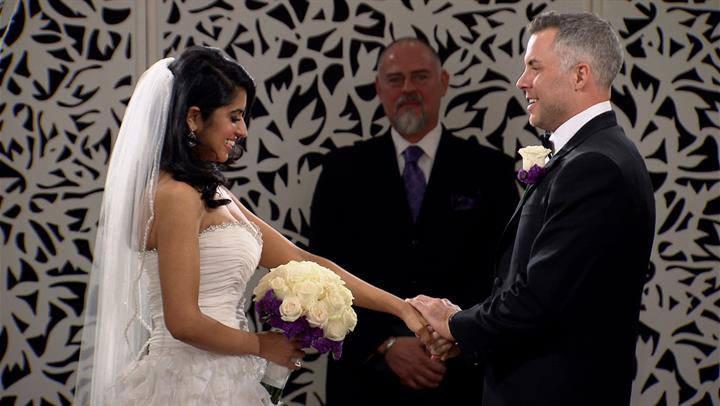 On Monday’s reunion episode of A&E’s reality series Married at First Sight the three couples reunited 6 months after their on-screen weddings.  For one of the couples it was the first time they had seen one another since the show wrapped. That couple was 35-year-old Trauma nurse Sean Varricchio and 34-year-old biopharmaceutical sales rep Davina Kullar.

Ironically the couple seemed like the most likely couple to make it at the start.

But last Monday both chose to go their separate ways and get a divorce after six-weeks together. And the split was not even amicable.

Tonight the two see one another for the first time and just as the convo is getting started the wedding photo of Sean and Davina symbolically falls and crashes to the floor. As if one time wasn’t enough the photo keeps falling.

Sean is his usual charming self but Davina is reserved. She looks like she is in a state of shock like she is realizing the entire relationship was a lie.

‘I do not believe that Sean was genuine in both going into this process and in the person he presented,’ she proclaims.

Kevin tells her that Sean said he was sorry and wanted to apologize.

Dr Cilona and sexologist Dr Levkoff lash out at Davina: ‘Where is your accountability at all here?’

Davina also claims Sean has been going around calling her ‘Satan’.

One interesting nugget of intel to emerge from the interview was that Sean and Davina did NOT have sex. (I originally thought I heard them say they had sex, but what they said is they initially “wanted” to have sex, sorry about that!)

Both claim that they wanted to have sexual intimacy in the beginning but changed their mind throughout the experiment. Sean who seemed pretty “horned up” (sorry for The Bachelorette reference–I could not resist) in the beginning quickly lost all interest in having sex with Davina which suggests to me that Sean has deeper issues than he let on.

We uncovered a lot of very interesting info suggesting Sean was not at all what he claimed to be. The info suggest Sean may have been a sociopath, a playboy, a narcissist and a cheater.