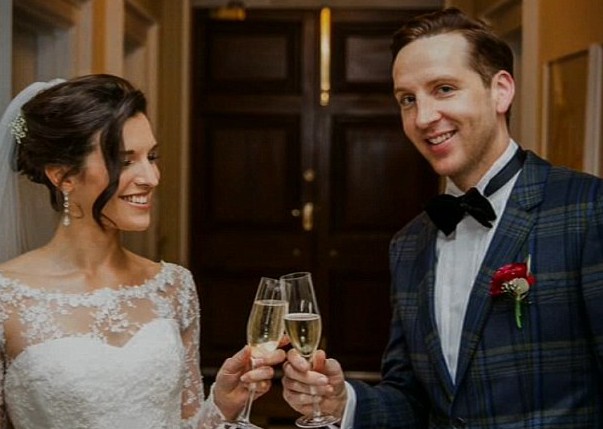 Married at First Sight is in it’s first season in the UK and it is off to a very rough start! One couple dropped out before the wedding and another couple barely lasted three weeks and it does not sound like it was quite a “perfect match”, nor does it sound like these two even liked each other as friends.

Last week it came out that Jason Knowles and Kate Stewart broke up after Jason started going on the dating site Tinder while they were married. Kate learned of the situation after a friend showed her that her new husband was looking for love online.

Jason has spoken to the media a few times since getting caught and somehow keeps digging a deeper hole for himself.

He told the Sunday Mirror that living together in their Bethnal Green, London flat was strange and uncomfortable. ‘We would kiss and cuddle – but it’s a strange thing to be lying next to a complete stranger night after night.’

‘At the start of the process they told us to send us a list of deal breakers and said we would not be matched with anyone who had them.

‘One of hers was smokers. I told them I smoke socially.’

‘I was stressed out one night on honeymoon and I snuck out of the room and went down to the bar for a smoke.’

‘I chatted to the bar staff and thought, “Kate’s upstairs having quiet meditation time.”

‘Not that there’s anything wrong with meditation but I just thought, “I’m having more fun talking to a barman I’ve never met than I am sat in that room with Kate.”’

He also told the Sunday Mirror: ‘I never cheated on Kate. Nothing happened until I decided it was over.

‘I had been out and one of my good friends said I needed to get back on the dating scene.’

‘We were being silly boys. He suggested I download Tinder. I pushed the button and his girlfriend grabbed the phone and was swiping left and right.’

A photo of Jason kissing a mystery woman has since appeared on Facebook.