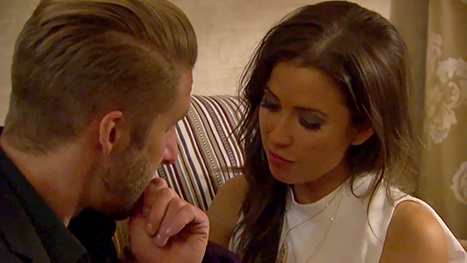 Season 11 of The Bachelorette is a train wreck. Kaitlyn Bristowe is moving really fast in multiple directions with multiple guys. She has not even gotten to Fantasy Suite Dates, but has already had sex with two guys, Shawn Booth and Nick Viall.

And in her People blog Kaitlyn Bristowe claims that she is ‘falling in love’ with Shawn Booth.

The situation is so dire that producers had to postpone Hometowns because Kaitlyn is a whirling dervish moving from one relationship to the next and they are panicked that they do not have a show. So they have decided to stay in Ireland another week so Kaitlyn can— in the words of Chris Harrison….wait for it…

Aka have mandatory sex with each guy getting a Hometown so no one will have an unfair advantage or disadvantage when she meets the parents.

Anyhoo, it appears that Shawn is still in the lead but who knows…when she goes to Hometowns she could fall in love with someone’s father or brother or the boom mic operator.

So I was very curious to read her People blog this week and see what she had to say about the awkwardness of all of the situations that she now finds herself in.

“I am imperfect. I was confused. I knew I was falling in love with Shawn. I was falling for a couple people. And, if I am honest (which clearly I am), I was scared of Shawn. I was worried he wouldn’t be able to get through the hardest part of the journey and he would leave. I NEED a strong man, not physically (although it doesn’t hurt) but emotionally. I was questioning my decisions and having a tough time understanding my actions and my feelings.

Shawn is clearly falling for Kaitlyn but there is a good chance he could just walk off. Previews for next week make it look like there is a serious throw down between Shawn and Nick after Kaitlyn finally confesses to her sexual indiscretion with Nick.

Michelle Money and Cody Sattler back together?