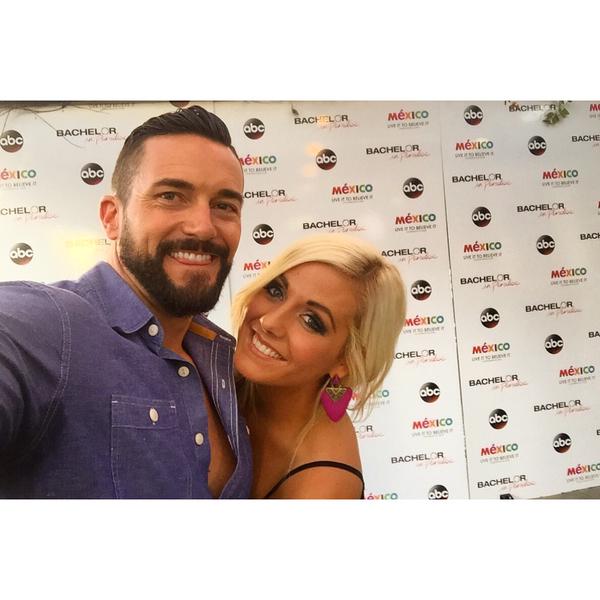 This is pure speculation on my part as a result of some rigorous Twitter stalking of both Carly Waddell and Dan Cox who both star on season 2 of Bachelor in Paradise.

So if you have read the spoilers you know the 29-year-old singer from Arlington, Texas love with Kirk DeWindt, but you also know that Kirk breaks up with her after the show:(.

But interestingly she does not look too bummed and her and 32-year-old Dan Cox have been posting pics together after the taping declaring they are now “friends”, but I think there is some serious flirtation happening here, because the pics are from so many different locations! How much time have these two had to “hang” after the show? If Dan is friends with Carly via Zak Waddell why had she never met Dan before? My guess is Dan had a crush on Carly but she was too in to Kirk to pursue but after the show finished taping and he learned about the break up I bet he put a call in to a friend named Zak Waddell and the rest may be history! They look super cute together!

@carlywaddell ummmmm first move in #BachelorInParadise ?!?!? I feel like I don’t even know you anymore Dan pursued Ashley Salter when she was hauled of in an ambulance for a mystery illness and the two appear to hit it off, but we know they do not make it to the end. So that relationship fizzles meaning Dan would have been single.

Dan is from Las Vegas Nevada by the way so not exactly down the street.

And seriously, look at them at the BiP party. I hope this is true and I hope it works out because Carly is so sweet, charming and gorgeous and really deserves a good guy.

AND she missed out on her brother Zak’s wedding to find love on the show!!!

And don’t feel bad for Ashley S, she is back together with her ex-boyfriend.